Which Gaming Console is the Biggest Power Hog?

The hardware geeks over at hardCOREware recently ran a battery of tests to determine which of the current generation of video game systems uses the most power. Unsurprisingly, the Nintendo Wii consumes significantly less power than the Xbox 360, PlayStation 3 and a typical gaming PC. 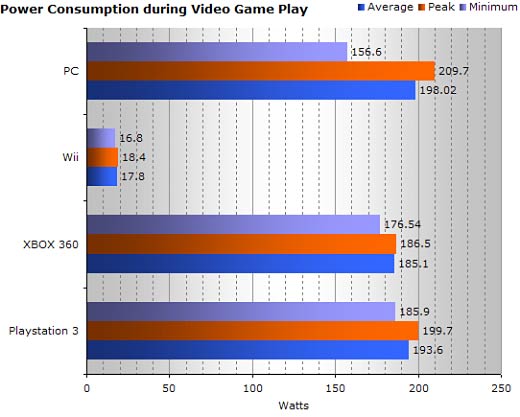 I was surprised, though that the Wii consumes about 1/10th the power of other modern console while playing games. Granted, the processing muscle of the PS3 and Xbox 360 is much more robust than the Wii, but with numbers like that, Nintendo could probably do an ad campaign around how much money their console will save you on your power bill each year.

Here’s how all of the tests played out (from least to most power consumed):

Even though the clear winner is the Wii, it does actually use more power than the other consoles when turned off if you leave the Connect24 service enabled during standby. It’s also interesting to note that an Oppo DV981-HD consumed less than 1/10th of the power of PC, 360 and PS3 while playing back a DVD, so it’s clearly better to use your stand-alone DVD player if you just want to watch a movie.