Epoq Media Player is the Size of a Matchbook

This tiny media player from Epoq is just a hair larger than a typical book of matches, yet packs a rich set of features into its diminutive package. 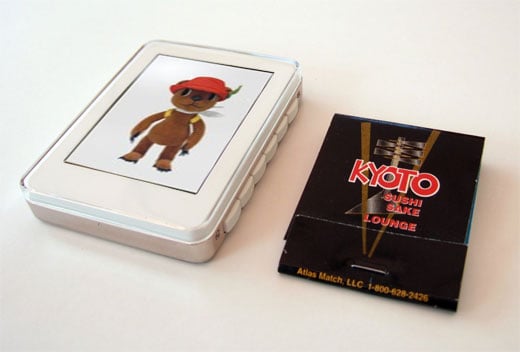 For starters, the minuscule player features a high-resolution, scratch-resistant 2.4-inch color (320×240) display which dominates the face of the device. Epoq’s clever design moves all of the controls to the perimeter of the device, maximizing screen real-estate.

It supports playback of video files in MP4 and AVI formats at up to 25 frames per second, as well as audio playback in MP3 and WMA formats. The player even has an FM tuner, voice recorder with microphone, and a tiny loudspeaker built in. The whole thing runs on a rechargeable lithium battery which provides up to 3 hours of video playback or 8 hours of audio.

It’s available with either 1GB ($99) or 2GB ($129) of on-board flash memory and memory can be expanded through the built-in Mini SD card slot.