I recently had the opportunity to sit down with the X-Arcade Tankstick home arcade controller and put it through its paces. It’s definitely worth a look for you die-hard arcade gamers out there. 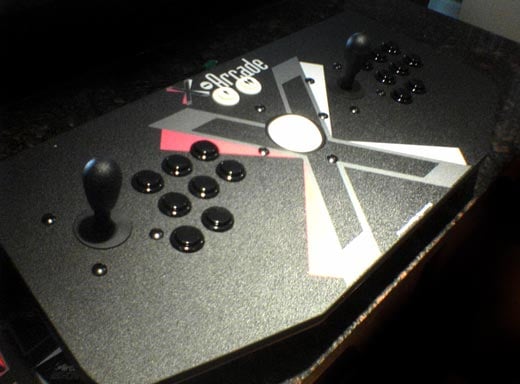 Let me start off by saying that the Tankstick is a one mammoth controller. It’s meant for serious arcade game fiends, and those who just have to have the biggest toys on the block.

First and foremost, the Tankstick is designed with PC gaming in mind, with a definitive bent towards those who like to play arcade and console emulators. There are adapters available so you can use the Tankstick with any console, but since these are optional, I didn’t get to try out the controller on my Xbox 360, PS3 or Wii.

I knew I was in for something special when this giant box showed up on my doorstep. Packed neatly inside, the controller is a whopping 30-inches wide, and weighs in at about 20 pounds. 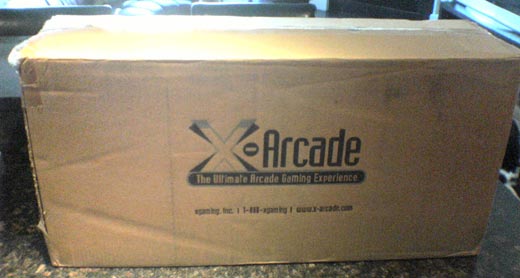 While you certainly can play with the Tankstick in your lap, its really way too big for anything but desktop or countertop placement. Build quality of the Tankstick is exceptional. It’s made from heavy duty arcade-grade materials, and includes real arcade joysticks, buttons and a full-size trackball.

The Tankstick features dual eight-way digital joysticks and eight buttons per player. This setup lets you play pretty much any arcade game ever made (other than games that demand a spinner or a wheel input.) The dual stick design works extremely well for classics like Smash TV and Crazy Climber, which both used two sticks in their original arcade incarnations. With dual controls and a name like Tankstick, the first game to pop into my mind was BattleZone. I was really looking forward to that one, only to find it virtually unplayable, due to the lack of any button or trigger directly on the joysticks. Regardless, pretty much any other joystick-based game I tried played just like it did in the arcade. The dual stick design is also really nice for two player games, assuming you put the controller on a hard surface instead of your lap.

Joystick and button responsiveness is excellent, and everything feels like the “real deal” here. In addition to the dual sticks and buttons, the controller features four side mounted buttons, which can be used for functions such as pinball-flipper games, or for coin-in triggering. There are also player one/player two start buttons, which each have nifty people symbols on them (oh the little touches!) 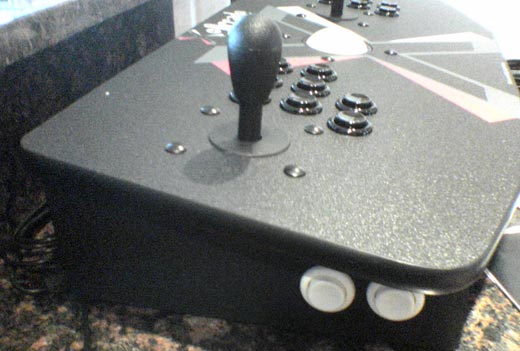 Setup was a bit more challenging than I’d prefer, but since this controller is really geared towards techie types, I won’t hold it against X-Arcade too much. The Tankstick comes with both USB and PS/2 interfaces, and all the cables you need to hook it up to your PC. You’ll need to make sure you have two available ports for this controller. One cable connects to the trackball, and the other one connects the joysticks and buttons. Once connected, I decided to give it a whirl with my install of M.A.M.E., the leading classic arcade emulator. 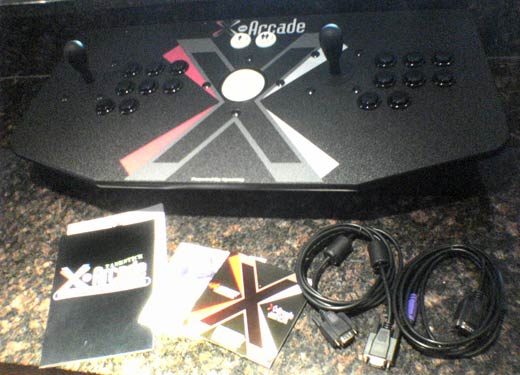 Since all of the digital functions are designed to emulate keystrokes, mapping keys to buttons is pretty straightforward, but can be time consuming. Thankfully, there’s already a configuration built into M.A.M.E. for X-Arcade’s sticks, making it fairly painless to get up and running (assuming you read manuals.) On the other hand, I had a heck of a time getting M.A.M.E. to recognize the trackball. After a bit of research, it turns out that the more recent versions of that emulator can support multiple analog devices, and I had to manually edit my configurations to get it to use the trackball instead of a mouse.

Once I worked out the trackball kinks, though, I was hooked. Classics like Marble Madness, Centipede and Crystal Castles all thrive on trackball play, and with the Tankstick’s full-sized orb, it felt so good to play those classics the way they were meant to be played.

I’ve spent alot of time talking about how well the Tankstick works with classic arcade games. Heck, X-Arcade even includes a handful of arcade games from Atari and Midway on two included CDs (real gaming snobs won’t settle for less than the original arcade versions under M.A.M.E., though.) However, since all of the controller’s buttons and joystick contacts are user-programmable, you can use the Tankstick with just about any PC game, as long as it can use the keyboard and mouse. I was even able to get the Tankstick working with Half Life 2, but I’m pretty old school when it comes to playing first-person shooters, so it felt awkward to me.

At $199.95, the X-Arcade Tankstick isn’t for everyone. It’s a massive piece of equipment and a bit challenging to set up at first. Its built like a tank, so unless you plan on dropping it on the floor, you get years of gameplay out of it. For serious arcade enthusiasts, it’s about as close as you’ll get to the real arcade without dropping thousands on a full-size arcade cabinet.