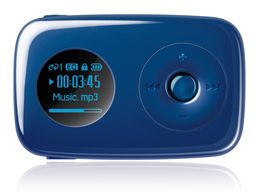 The new model takes all of the features of the original ZEN Stone and adds a bright blue round OLED display for song title and other pertinent information. In addition, the Plus bumps the memory up to 2GB vs. the 1GB that’s in the first model. The Plus also adds a voice recorder, clock, stopwatch and FM tuner which weren’t in the original Stone. Battery life is just a tiny bit shorter at 9.5 hours vs. the 10 hours of the original, but that’s to be expected whenever you add a display.

Now all these features do bump up the cost a little bit. While the 1GB ZEN Stone costs just $39, the 2GB ZEN Stone Plus is expected to run about $65 when it’s released later this Summer.