Crosley portable turntables have been around since the 1950’s. Now they’ve added a modern spin to their briefcase-like record players by adding the ability to easily rip tracks to your Windows PC or Mac. 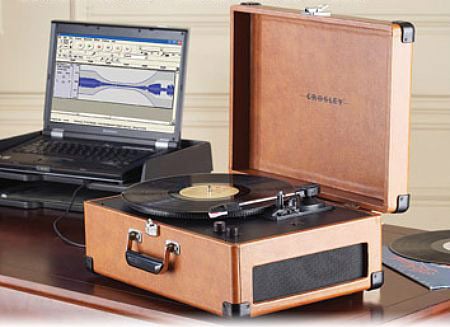 The Crosley Keepsake USB Turntable not only lets you play back and listen to your old albums through its built-in stereo speakers, but includes a USB output. The portable player has speed settings for 33, 45 and 78 RPM records, so you’ll be able to convert just about any record you might have in your collection (unless you happen to own some really ancient 16 RPM discs). The player also includes the software you’ll need to convert and clean up your tracks in MP3 digital format.

While Ion has been making a similar USB turntable for a couple of years now, the Crosley bests that player in the style department for sure. The Crosley also doubles as a fully-functional sound system, while the Ion has no speakers or amplifier. You can find the Keepsake turntable at Brookstone for $149.99.