By now, we’ve all heard plenty about Blu-Ray, HD DVD and the so-called HD “format wars”. Now a little upstart disc format known as HD VMD has started to ship their very first players for less than half (correction: now just a little bit less than) the price of the cheapest standalone Blu-Ray and HD DVD machines. Just this week, the first HD VMD players have begun to show up on Amazon, with prices starting at just $189. 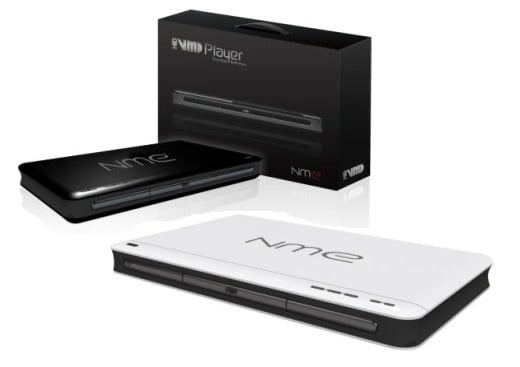 New Medium Enterprises’ (NME) proprietary HD VMD (Versatile Multilayer Disc) format uses standard red lasers, but crams in 4 layers per disc to handle the data needs of full high-definition content. VMD’s cost advantage comes from the fact that discs and players can be produced using much of the already existing infrastructure that’s set up to produce standard DVDs. First generation VMD will store up to 24GB, but there are already plans in the works to expand this capacity further using more layers, and potentially thinner wavelength blue lasers as prices come down.

The manufacturer claims the format supports full 1080i and 1080p resolutions, as well as bit rates up to 40 Mbps (about half way between the two competing HD formats). The players support video compressed in MPEG- 2, MPEG-1, VC-1, H-264(AVC) formats. As an added bonus, HD VMD is region free, so you don’t have to worry about where you bought your discs. Audio support includes Dolby Digital and DTS, but none of the more advanced audio formats you might find on Blu-Ray and HD DVD players. Even the least expensive HD VMD players offer HDMI and component outputs, and will scale old-school DVDs up to 1080p over the HDMI connection.

The most obvious downside to the budding format is the current lack of available content. NME has only scored distribution rights to a a handful of movies that I’ve ever heard of. Launch titles include: Hostage, Apocalypto, Pulp Fiction, Babel, Saw II and Saw III. Most of the other movies are either lesser-known independents, older films or Bollywood features from India. It’s doubtful that the company will be able to garner support from most major studios, given their already significant investments in the other HD formats. With HD DVD and Blu-ray prices on the decline, HD VMD will face a serious uphill fight.