While Apple TV gives its users access to a lot of popular movies and TV shows, its limited functionality and lack of support for other popular sources of content means that it won’t be as popular as Apple’s other products. Which is why upstart Myka‘s digital media receiver was developed in an open platform, just begging to be enhanced and tweaked. 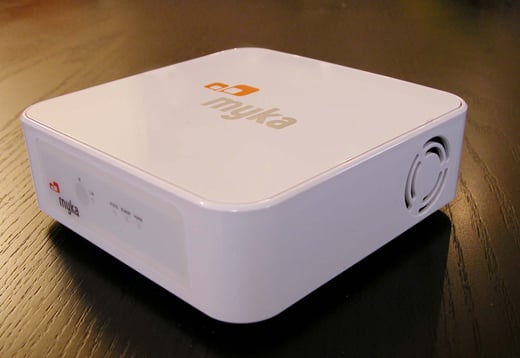 At the heart of Myka’s hardware is Sigma Designs’ SMP 8635, which “provides CPU and digital signal processing capabilities.” Like the Apple TV, Myka has both wired and wireless internet connectivity, a USB port and the customary HDMI/composite/SPDIF ports. Unlike the Apple TV however, Myka’s internal hard drive capacity can be as large as 500 GB. If you’re wondering if it’s already supported by major content providers, the answer is no, not yet. So what are you going to put in all that hard drive space?

Easy, just torrent ’em. That’s right, Myka has a built-in BitTorrent protocol – or can be installed with one of your choice, it’s open source remember? No need to use a separate computer. The company also says that they Netflix support may be available soon.

To match all the stuff that you can download or stream, Myka supports a boatload of audio and video codecs, some of which have yet to exist. Kidding. Some of you probably know that support for various media formats is another weakness of the Apple TV.

I could go on and on about the features and possibilities that Myka offers, but we’ll just have to wait and see if the device lives up to its potential. Support from both the big industry players as well as community developers will be equally crucial in Myka’s rise or burn out. You can order one now at the company’s website; the 80 Gb Myka costs $300 USD, the 160 GB costs $350 USD, and the 500 GB version costs $460 USD. Myka are slashing $20, $30 and $70 USD off the respective prices for the first 1,000 buyers.