Cat Gets 100 Stars, Game Gets All of Your Time

What if Super Mario Bros. had been a simple gray game with a cat instead of the overalled duo? It would probably look something like Cat Gets 100 Stars, which is kind of the point. But while Cat Gets 100 Stars is short on complexity at first glance, a few minutes spent poking around reveals there’s a lot more here than meets the eye. 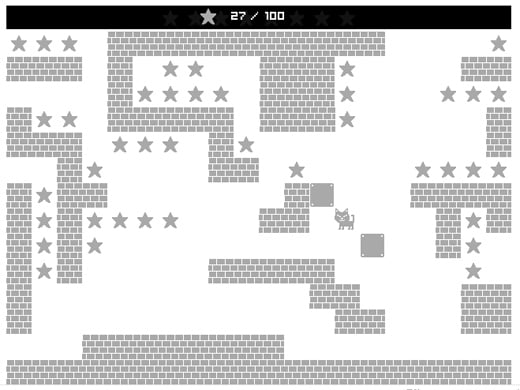 The titular cat bounces (with an adorable sound effect) around collecting stars, but there are lots of secrets to discover, such as blocks that move and others that are invisible until smacked with a kitty head. Standard platforming fare, but freely available for the price of a few mouse clicks.

Cat Gets 100 Stars would have been worth checking out on the power of its name alone, but it’s nice to report there’s a lot more to it than that.

[Cat Gets 100 Stars via auntie pixelante]