Remember the BowLingual? Released in the early 2000’s, the device claimed that it could translate your dog’s barks into phrases and emotions that told you what your dog was thinking, or how it was feeling. Now the BowLingual has gotten a 2009 upgrade, which actually gives your dog a human voice. 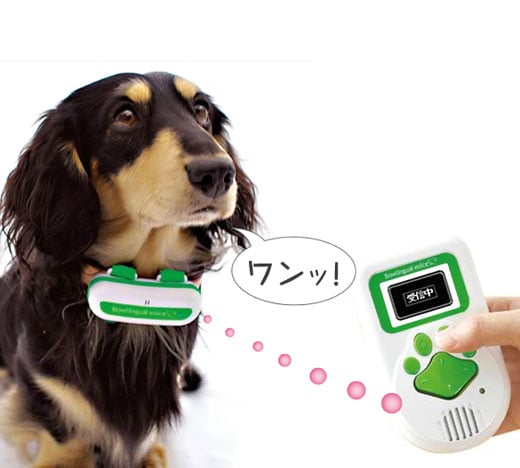 Just place the bark-sensor collar around your pup’s neck, then grab the wireless controller and the BowLingual Voice will speak on your dog’s behalf. Unfortunately, the Bowlingual Voice only speaks as a Japanese lady at this point – which means that you’ll still have no idea what Scraps is saying unless you have a Japanese-to-English translator. What we really need is a Dog-to-Japanese-to-English translator.

Actually, I have a pretty good idea that Scraps is saying something like “get this damned ridiculous collar off my neck or I’ll bite your ass! How many Yen did you pay for this thing?!?!” Here’s a rather silly video of the device in action in case you or your dog care to watch…

More info on the BowLingual Voice can be found over at Japan’s TakaraTomy. No word on an updated MeowLingual for your cat, but it can’t be far behind.