Commodore 64 Vs. the iPhone 3gs: Guess Who Won?

After the arguably unnecessary rejection of the Commodore 64 emulator for the iPhone, Technologizer‘s Harry McCracken – whose last name would be much cooler if it ended with an exclamation point: McCracken! (and started with Zak) – decided to pit the iconic Commodore 64 with the future Hall of Famer, the iPhone 3GS, just for the heck of it.

The head-to-head serves as a reminder of just how much technology has changed over the years, as well as a rough idea of how freakin’ rich Apple must be: while the old breadbox has a colossal lead in terms of total units sold at 32 million (it was first released in 1982),  a head esploding 1 million iPhone 3GS units were sold on its first 3 days on sale alone. That’s just insane. 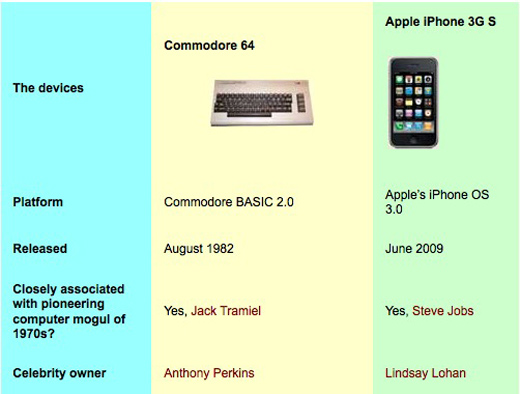 That’s the start of the list. Funny how the C64 is almost all keyboard while the iPhone has no real keyboard at all. Other interesting facts: there are a total of 50,000 apps for the iPhone. McCracken(!) goes by the official number of C64 apps which is more or less 10,000, but several commenters are claiming that there are up to 100,000 programs for the C64. That seems like a huge advantage, until you realize that the iPhone is only less than 3 years old while the C64 is 27.

Of course the iPhone sweeps the tech specs trophies, but the C64 won lots of love because it offered… FREEDOM! The William Wallace of gadgets had neither carrier tie-ins nor app approval jujitsu. As one commenter said, if there was an iPhone emulator for the C64 it would’ve been warmly welcomed and immediately approved, no questions asked, except maybe “Would you like some cookies?”

Head on to Technologizer for the full list and the flame war. The C64 fanboys (fangrandfathers?) are winning. McCracken! Sorry.