Compared to all the other Japanese gadgets we’ve seen, the Sushi Train Restaurant and Game is only mildly Japanese – i.e. not so weird. It’s a literal take on the popular conveyor belt sushi restaurants, which are also known as – wait for it – sushi trains. The set includes a replica of the N700 series Shinkansen, which can go as fast as 186 mph. Just place sushi – or anything really, you can use kittens if you like – on top of the 2 train cars and watch it go round and round. 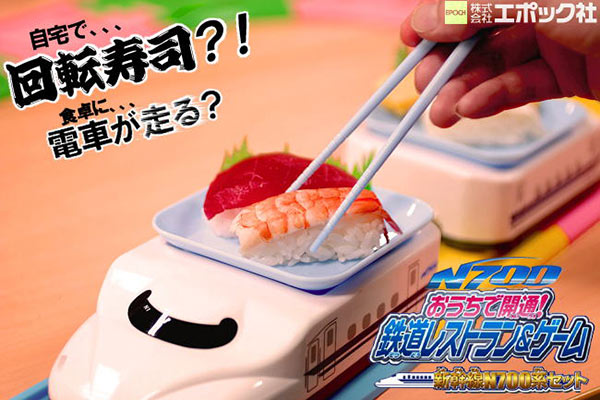 Each set includes a controller, 8 pieces each of curved and straight rail pieces, chopsticks, a couple of plates, and several fake sushi. See? Mildly Japanese.

You can get the Sushi Train Restaurant and Game at Japan Trend Shop for $128 (USD) ($73 + $55 for shipping). The train runs on 2 AA batteries, while the controller needs 2 AAA batteries. I don’t know if they’re included.