The Ultimate Million Dollar Speaker: Sign Me Up for Two!

Let me start out by saying that my entire 5.1 home theater sound system cost less than $1,000 bucks, so the thought of paying $1,000,000 for a single speaker is about as foreign a concept to me as Paris Hilton spending $325k on a dog house. 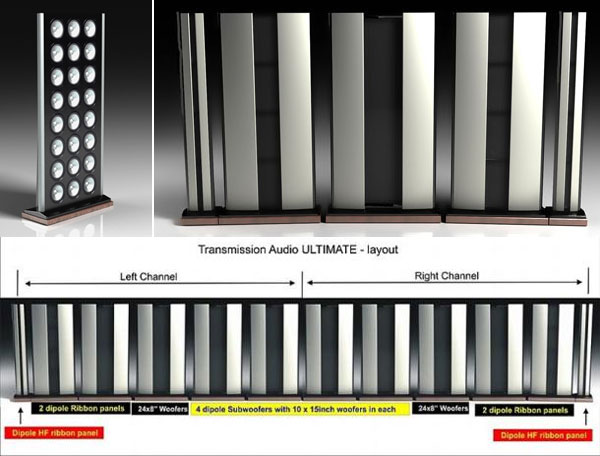 Still, if you have more money than god, you might want to check out Transmission Audio’s Ultimate, a gigantic speaker that houses an array of seven-foot tall panels loaded with an ungodly amount of speakers. Measuring in at nearly 19 feet wide, and loaded up with forty 15-inch subwoofers, twenty-four 8-inch woofers, and a boatload of 2-inch and 1-inch ribbon tweeters, it’s best to think of The Ultimate like a meta-speaker, rather than a single entity. That said, each one is still a designed for mono sound – so if you’re looking for stereo, be prepared to shell out a cool $2 million bones. And for a full 7.1 sound system, you’ll be looking at more than the GNP of some third-world countries. 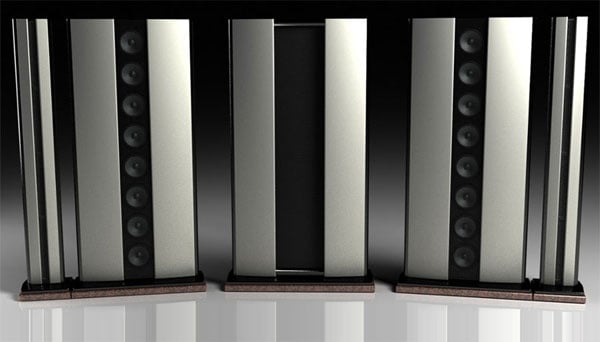 Frequency response for the Ultimate is rated at an unreal 15Hz to 50kHz, and each system comes with a set of six 500-watt-per-channel dual mono amps, capable of cranking out a total of 6,000 ear-shattering watts of power. At full blast, the speakers can pump out an astounding 146dB SPL. That’s somewhere between “HUMAN BODY FEELS AS IF SOMEONE JUST FOOTBALL TACKLED YOUR CHEST” and “FORMULA 1 RACE CAR, 700 HORSEPOWER” on the decibel chart. Now that’s what I call a sonic boom. Just don’t come crying to me when your neighbors call the cops.