I don’t know if he’s the action figure counterpart of console modder Ben Heck, but the customizer who goes by the moniker Jin Saotome does have an extremely long list of modified or custom made action figures. While most of them are Transformer mods/creations, I like his G.I. mods, where he mixes parts together to recreate characters from other brands. If you’re a fan of webcomics, prepare to have your day made, because here comes Dr. McNinja! 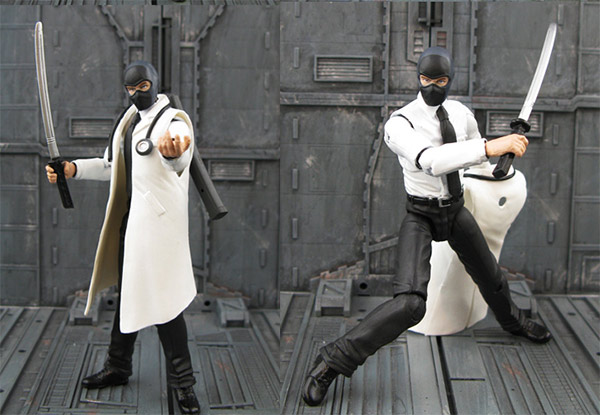 I could hardly believe my eyes when I saw this. Jin made the Dr. McNinja figure using a Firefly head and an SDCC Destro body. The coat was taken from an ROC The Doctor figure,  while the sword and sheath are from a Paris Snake Eyes figure. The stethoscope was made with using headphone wire. Awesome awesome figure. Now I know that there’s an official RE 5 Chris Redfield action figure, but I want to show Jin’s mixing and matching (and painting) skills, so here’s Jin’s take on the zombie-slaying cop: 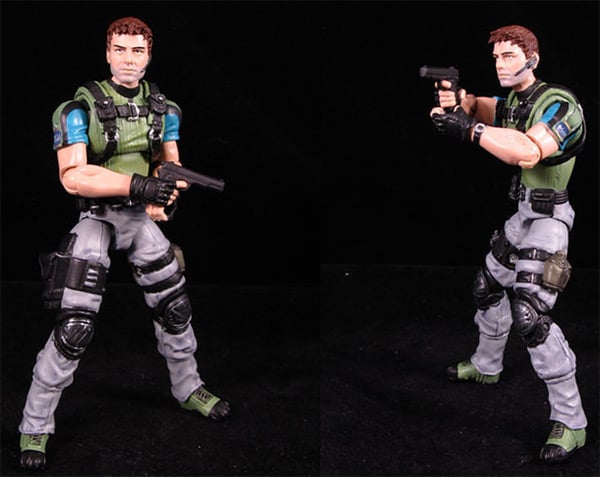 Chris Redfield is made of  a custom Chris head from Broken Arrows Toys, a Firefly/beach head body, Storm Shadow upper arms joined to Tiger Force Flint lower arms,  Resolute Duke hands and legs, and some custom weapons from Marauder Gun-Runners. Finally we have Jin’s Air Man. Even though Dr. McNinja is still my favorite Jin Saotome creation, special mention goes to Air Man, probably the most complex of Saotome’s action figures. Air Man’s chest fan actually works and is battery powered. And even if it didn’t, man, look at the details!

Air Man is made of the following: an Animated Wolverine Colossus sans head with sculpted eyes for the upper body, Astro Boy Peace Keeper arms and lower legs, and Accelerator Suit Snails upper legs and waist. Jin made Air Man’s fan using styrene sheeting and a Nokia cellphone vibration motor.  The magnetic Wind Gust was taken from a DCU Red Tornado action figure. Unfortunately some lucky bastard already owns Air Man, and Jin says he had an insanely difficult time with the figure so he won’t be making another Air Man anytime soon.

Jin regularly auctions off his creations on eBay; keep an eye on his item list if you don’t want to miss out on his auctions. Check out his website for more custom action figures. I want a Dr. McNinja action figure dammit! :(