In theory, controlling things with your voice is a great convenience. For instance, my Mustang has Ford’s Sync system in it, and being able to tell the car who I want to call is a great thing. I have tried voice control stuff before that just doesn’t work though and never seems to recognize my voice.

One of the things that I never really wanted to control with my voice was my alarm clock, other than wishing it would stop ringing when I growl “Shut the F*ck Up!” early in the morning. I don’t think this slick Moshi Voice Control Digital Clock Radio will respond to that particular voice command. 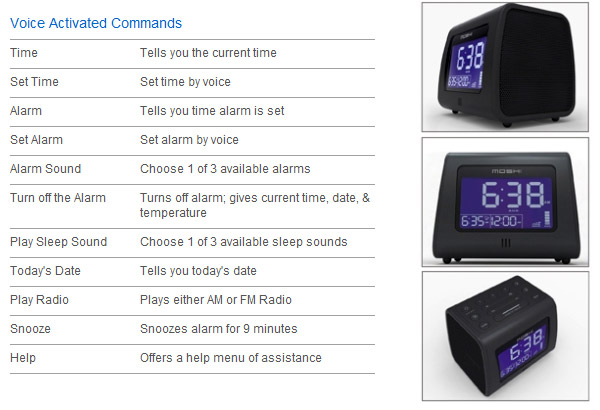 The thing will respond to just about any other voice command though. You can program the alarm, the time, the radio presets, and lots more simply by saying the appropriate command. The clock has dual alarms, stereo speakers, and three alarm sounds to choose from. This clock is perfect for the visually impaired and is recognized by the World Blind Union. The clock is available now for $69.99 (USD) over at Moshi.