Mass Effect 2 Costumes Should have Won Best in Show

Now that the dust has settled on 2010’s Comic-Con, it’s taking us a little time to digest all things awesome which surfaced at this year’s show. One of the greatest achievements of the show in my opinion is these most excellent Mass Effect 2 costumes by FyrielArt (aka Crabcat Industries). 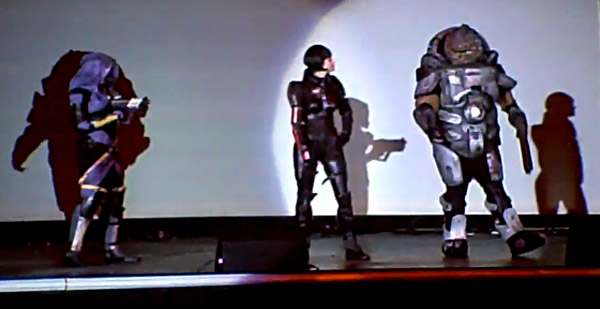 Based on Mass Effect 2’s Suicide Mission, we have before us The Illusive Man, followed by the female version of Commander Shepherd decked out in all her glory, and standing along side her, Tali’Zorah nar Rayya. But the real star of the cosplay show has to be the Grunt, complete with functional animatronic head and glowing eyes. Check out the amazing costume in the video clip below:

Here’s a great close-up of the Grunt head before it headed off to Comic-Con:

Incredibly, these guys didn’t win Best in Show at the Comic-Con Masquerade contest (these guys won). But at least the judges had the good sense to award the Mass Effect guys the Judges’ Choice award.

On second thought, the Commander Shepherd costume ain’t half bad either: