Google Scribe: You Autocomplete Me

While the big G is promoting their newfangled Instant search, it’s not the only newly unveiled technology from the company. Released just a few days ago, Google Scribe is a text completion service. Google says that the tool’s suggestions are based on what the user has already typed, but that’s not the whole truth. We’ll get to that later. Obviously what you want to know is, is it useful? Yes it is, in an interesting way. 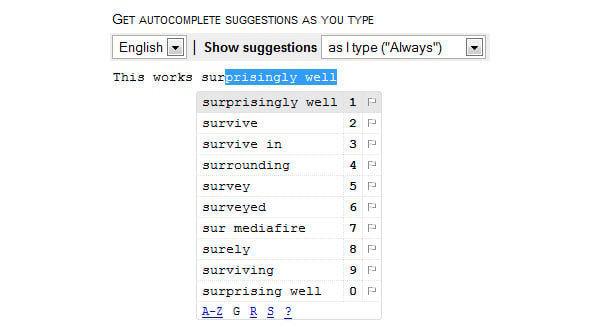 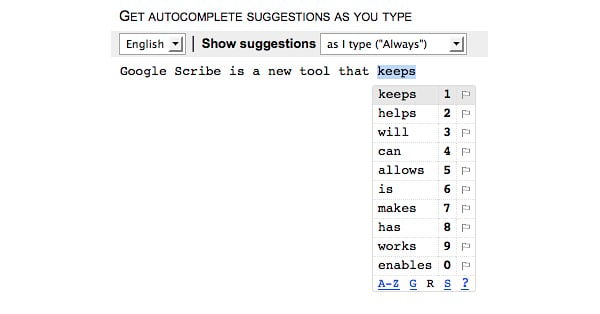 The letters you see below the last suggestion are sorting schemes for the suggestion, and this is where the funny thing about Google Scribe comes in. ‘A-Z’ sorts suggestions alphabetically, ‘S’ sorts by “typing savings”, ‘R’ sorts by “relevance”, and ‘G’ sorts by “Google Rating”. You’d think that typing savings would mean that the answers are arranged from the most number of characters to the least, but that’s not always the case. I’m not quite sure how Google Scribe sorts by “relevance”, but in my experience I found it to be the most helpful sorting scheme. Unfortunately, Scribe uses Google Ratings by default. Look at the screenshot below:

Flattering, yes, but do you realize now how Google Rating works, and how potentially irritating and/or hilarious Scribe can be? No? Here’s one more example:

Google Rating is just like Google Search – it suggests terms based on how popular a phrase is. In this case, as explained by Google Operating System, it seems that the phrase “Why choose IngentaConnect” is used frequently on IngentaConnect’s website, and perhaps on other webpages as well. So Google Scribe is indeed an interesting tool, but I suggest you stick to the Rating sorting scheme. I found that the suggestions offered by the Rating scheme not only made more sense, they also helped me think of other ways to say what I was going to say.