I have said it a few times, the selection of local radio stations in my area sucks. You can get 15 channels of country and one channel of rock. I have some digital tunes and a few CDs, but I don’t like to listen to the same stuff over and over. That leaves internet radio if I want some tunes and often means I am tied to the computer. 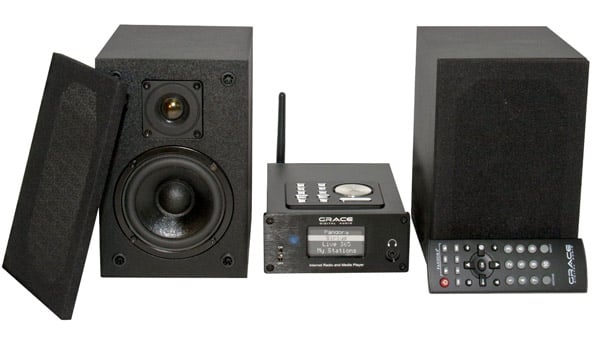 Grace Digital Audio has a new micro shelf system with stereo speakers called the Grace Wi-Fi Stereo Micro System (GDI-IRMS300). The system has integrated Ethernet connectivity and supports 802.11b/g/n WiFi as well for wireless streaming. The radio has FM, AM, and HD tuners for tuning normal stations and it has the ability to stream just about anything from the web.

The system supports Pandora, Rhapsody, NPR, Sirius, and a lot more. The system can tune about 50,000 radio stations in total and it has 16W of peak power. Each speaker has a 3.5″ main and a 1″ tweeter. Other features include a dual band EQ, support for all sorts of digital file formats, and a media player that can stream tracks from your computer. The system retails for $249.99 (USD), but you can already find them over at Amazon for under $190.