Videos that depict the future of computers crop up every now and then, and although they are fun to watch, most of them are more flash than substance. This clip from Corning Inc. – the glass and ceramics company that gave us Gorilla Glass, among other things –  is no better, since it’s obviously a very biased conceptualization, but it does contain a few neat, if not mind-blowing, ideas. Take this one for example, a fridge door where the pictures are digital. Animated GIFs on your fridge door ftw! 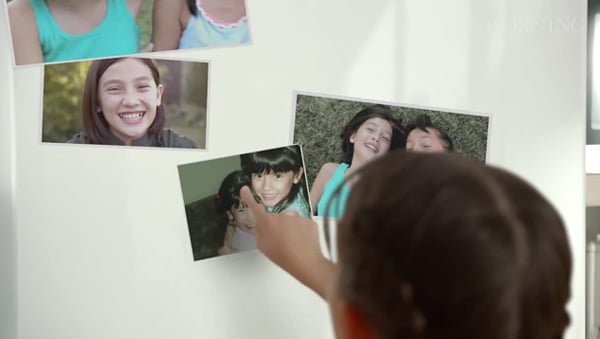 Isn’t it funny, yet inevitable, that our visions of the future are always constrained by what’s in our present? For example, why are the interfaces so reliant on touchscreens? Did you see how inconvenient it was for the mom to type on her bathroom mirror and set up the map in her car? We already have voice-recognition software like Dragon Dictation; I’d like to think that the future will have more of that. Why type when you can dictate? Hell, KITT exchanged witty banter with Michael Knight.

What about wild ideas like controlling computers with your eyes, or with your thoughts? Or phones that don’t look like transparent iPhones? What about a phone that’s embedded in our ears and eyes? Where are the holograms? And where are the actual keyboards?

But I may be asking too much of Corning, because the video is an advertisement more than anything else. And as I said the company does have a few neat ideas, especially when it comes to what they know best – tough glass, large seamless displays, appliances with multipurpose glass parts – but I’d like to think that the future of computing is not just more of what we have now, but something better.