If you’ve been browsing tech blogs anytime during the past week, then you’ve heard the rumors that Apple will soon unveil upgrades to their MacBook Pro lineup, with one of the upgrades being Light Peak, an fiber optic interface that’s being pitted against USB 3.0. A couple of pictures have popped up that seem to show that Apple has named the Light Peak port to ‘Thunderbolt’, but I digress. Back to the technology itself – It seems that Light Peak is not only capable of speedy data transfers like what’s possible with USB 3.0, but it also allows different kinds of data to be streamed simultaneously and along multiple devices. 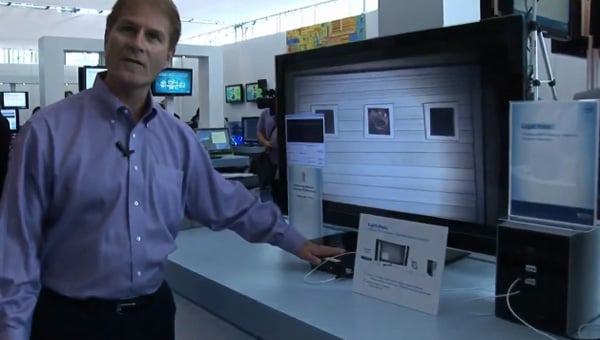 As shown in the demo below, not only will we be able to stream video while transferring data at blinding speeds, we can also move data around between two devices even if they’re not directly connected to each other, as long as they’re both connected to a third Light Peak-enabled device. And so on.

I hope this doesn’t mean that Apple computers will have even fewer ports. “The 2013 MacBook Pro has only one port – the magical Light Peak port, since you can daisy chain your other devices to the device that you connect to that one revolutionary Light Peak port, creating a cluttered mess that changes everything. Again. For the worse. What an awesome port. If a unicorn and a strip of bacon had a child it would be this port. It’s simple. It’s amazing. Simply amazing. Amazingly simple. Adverbly adjective.”