If you are a fan of sports cars and the Porsche brand you might recall that awesome 911 GT3 hybrid racing car that I talked about a while back the car looks fantastic on the outside, and if you thought all the racing tech inside the vehicle sounded complex, take a peak at the beast’s steering wheel. That has more buttons on it than the Logitech racing wheel I use for Gran Turismo 5. 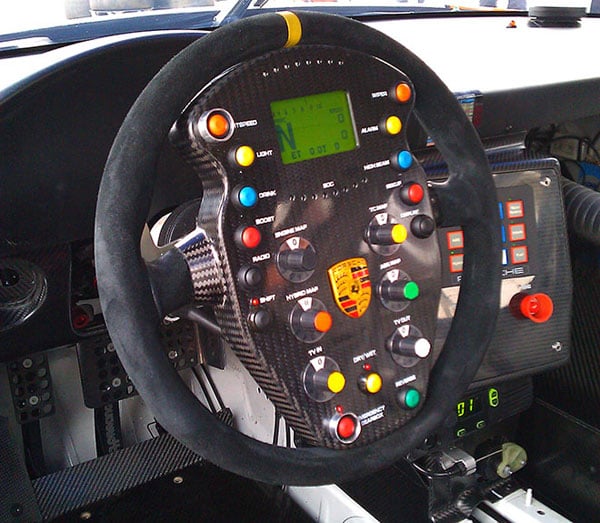 It appears that the wheel is covered in Alcantra, which is a fantastic material for grip. It has a carbon fiber housing in the center that has a ton of buttons and other stuff on it. The LEDs you see above and below that, display would probably be the shift light. The LCD has all sorts of things on it, including a big indicator for the gear the car is in.

The wheel is festooned with all sorts of buttons and knobs. I see buttons for radio, headlights, alarm, and wipers. Those knobs I presume are for changing things like engine programming and perhaps brakes. The coolest button though is the boost button that shoots the car forward on hybrid boost when the driver needs to pass. I would hit those buttons all the time by accident.