Many iPhone, iPod Touch and iPad owners are addicted to Coin Dozer, the virtual arcade coin-pushing game. I apologize in advance to those who are going to be addicted to it because of this post. YouTuber StijntjheYT is one of the million of people who are addicted to the game. Or not. Does building a robot to play the game for you still mean you like the game? 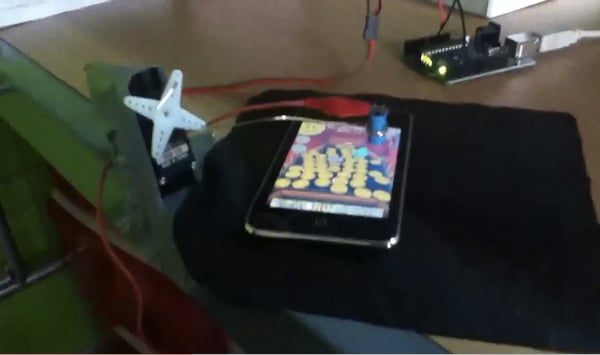 StijntjheYT didn’t provide specific build instructions for the robot arm, although he did say that he used a “stripped electrolytic capacitor connected to a wire.” No, sorry. Didn’t get a word of that. What’s a wire again?

Power leveling in a casual game. Huh. Times sure are a-changin’. Actually StijntjheYT… can you build me a ‘bot that plays Tiny Tower?