Want to take panoramic photos with a single click? How about a video of your surroundings without having to sweep your camera around like a fool? Soon that may be possible, and not because of a fancy new digital camera case. If inventor Tom Lawton gets his way, his BubbleScope concept will let us do just that and more using only our smartphones. 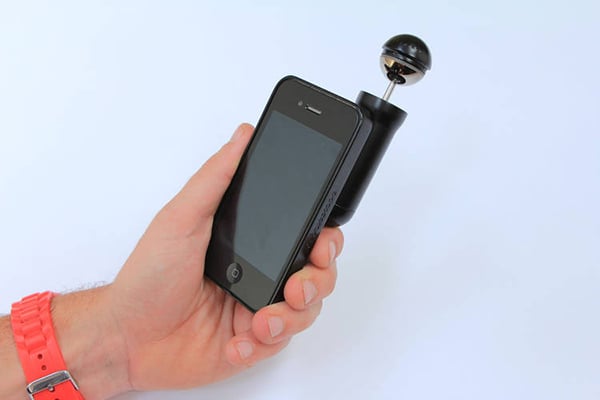 The most important part of the BubbleScope – which looks a lot like a Move controller – is a pop-up curved mirror. When attached to a smartphone via a complementary case, the lens of the smartphone will then capture what’s reflected on the mirror – 360 degrees horizontally and 120 vertically. A custom app lets you view and share the captured “Bubbles”. There will also be an online community to make it easier for people to share and view Bubbles posted by members.

Above is a sample shot taken with a smartphone and a pre-production BubbleScope. Lawton says that the final product – if it goes to production – will result in better picture and video quality. The BubbleScope isn’t the first such 360-degree lens/case for smartphones, but this one is unique that it will work with other phones besides the iPhone. Here he is to explain more about the inspiration behind the BubbleScope:

You can support the development of the BubbleScope at Crowdfunder; pledges start at £20 (~$32 USD). If the BubbleScope becomes a real product, Lawton reckons it’ll cost £50 (~$80), while the cases will go for £15 (~$24). I think it’s unfortunate that the case is sold separately since the BubbleScope is useless without it. I understand that different smartphones need different cases, but perhaps the BubbleScope should come with one free case.

Overall I’m not entirely sold on the concept yet, but I don’t regularly take pictures or video either. I do think the BubbleScope will be useful in certain situations – Lawton also mentioned a possible app that could calculate the distance of objects within a captured bubble. I’m just not sure if it’ll be useful or fun enough for normal people to spend more than $100 on it. The one thing that I think regular folks could find handy with the  BubbleScope is in taking group pictures and videos. That being said the sample images are significantly warped and don’t look good when viewed as a flat picture. Check out the official BubbleScope website for more info as well as more sample shots.