Hack RUN for iOS is Familiar Yet UNIX

If you’re a PC gamer, you might have come across a little indie game called Uplink. Released in 2001, Uplink lets players pretend to be a hacker. What makes Uplink so great is that its interface instantly immerses you into roleplaying as a computer expert right from the get go, even though the commands you enter are actually simple. A game called Hack RUN tries to take that same tactic and experience to iOS devices. 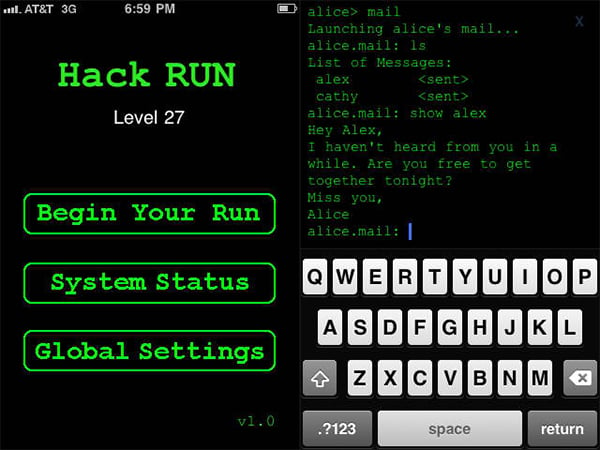 As soon as you start up the game you are greeted with the command-based interface that will be familiar to programmers and older computer users (although obviously I have no idea what kind of interface or software actual hackers use). Along the way you learn more and more DOS- or UNIX-like commands that you will use to complete your objectives.

The game cleverly ties in the actual gameplay – i.e. typing – with the game’s own menus. For example, typing ‘h’ will bring up the help menu for the game itself or any other programs you may encounter while playing, depending on which menu you are. So the whole time you’ll only be staring at the hackery green text. Unless of course someone calls you or you receive a text message or notification while you’re playing. 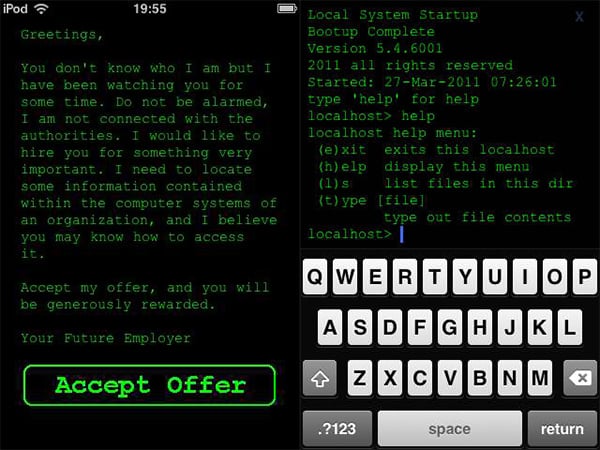 I was hoping to find a video for this game to give you a better idea of how it plays, especially since I’m still in the earlier stages and can’t vouch for its overall value. You can imagine what results I got from searching for “hack run iphone” on YouTube though. Shows how much I really know about using software. But Pixel Perfect Gaming does have a review of the game and I agree with their gripe: Hack RUN has the worst implementation of achievements. It congratulates you for nearly every thing you do right, even just for starting the game. I don’t think hackers need that kind of encouragement, so it kind of breaks the immersion.

Speaking of value, the full version of Hack RUN is currently available for free. This is only a limited offer though, probably to promote the recently released prequel to the game, which is called Hack RUN Zero. So go download it now from the iTunes App Store before the offer expires. No hacking or jailbreaking required.