I have seen all sorts of stuff made from LEGO, and much of it is really cool. I particularly like it when someone builds mechanical things out of LEGO that actually do something like the dude that made the LEGO shirt folding robot. A guy named Arthur Sacek has made a really cool LEGO creation that can make 3D prints out of floral foam. 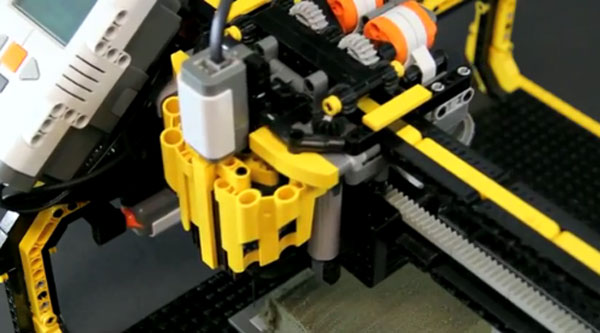 The milling machine that Sacek created is made entirely out of LEGO except for one key part. The drill bit that actually carves the foam block is a real drill bit purchased at the store. The milling machine isn’t exactly fast and you need some CAD chops to make the guiding templates for the cutouts. Check out the video below to see the machine in action.

It took the milling machine over two hours to cut the foam into the face shape. At first, I thought the machine didn’t work until he sucked the cut foam off and then blew the little bits away to reveal a face that looks exactly like the software rendering he created.