Darwin has a problem. The first step to dealing with the problem is admitting that he has one, which he won’t do. He likes the drink too much. When he doesn’t get it, well, he hurts those around him. 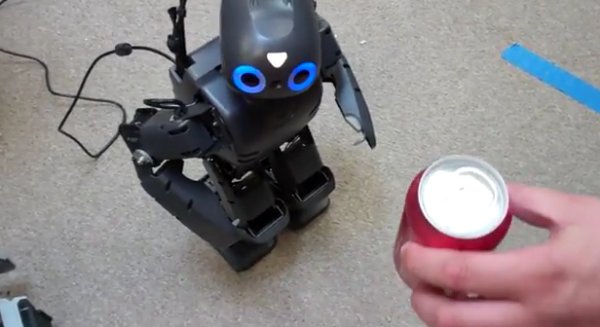 It’s all in the video. I hope they played it back for him during an intervention. You see, in the video, Darwin-OP is offered two beers by a pair of abusive enablers. One is a Bud Light and the other is Tecate. You can see that he is already “not okay”. He is clearly suffering some withdrawal symptoms and he’s probably shaking a little too. Yet his tormentors continue.

Whenever presented with the Tecate, he’s like transfixed. His eyes follow it everywhere. He wants some of that liquid crack. It’s maddening. He runs to it and just stands over it as if saying, “My precious”. One of the laughing enablers picks him up by the neck and he is still running toward that sweet nectar. Running in the air! Darwin has it bad.

Finally the little bot can’t take it anymore. He has had enough. If he can’t have that joy juice, nobody will have it. He starts kicking the can, all pissed off. I don’t blame him. Poor little guy needs him some rehab.

This is why you don’t give robots booze.