The inverse proportion of awesome Kinect hacks to decent Kinect games continues. Software engineer Taylor Veltrop used a combination of store-bought items and his non-store-bought brain to come up with a robot that mimics his movements sends video back to him in real-time. The robot’s first mission? Brush Veltrop’s cat. 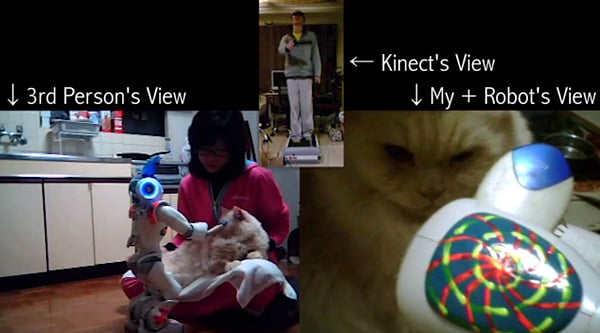 Using a Kinect, a Wiimote, a treadmill and a custom made head-mounted display (HMD), Veltrop was able to control a NAO robot remotely and almost entirely through his movement alone. A couple of cameras mounted on the robot allowed Veltrop to see what the robot was seeing, which in this case was his unimpressed cat.

Wow. That took a while. Then again, that was the work of one man operating on a meager budget. Can you imagine if more work was done towards perfecting this? Businessmen of the future could hold meetings remotely and brush each other while talking about fiscal years and mergers and burgers and stuff! Seriously though, this is some Daimos-level technology. From here we can have easy to operate robots that will sub for us when it comes to dangerous activities such as bomb disposal, search and rescue, cleaning the toilet… the possibilities are endless. And it started with a video game device with no decent games.