Hamster-Powered Submarine Doesn’t Fire Tiny Torpedoes (But it Should)

I have to think all the way back to 2007’s hamster-powered paper shredder to the last time I wrote about a gadget which could run on rodent power. But much like the Flintstones, I’ve always wanted more technology to operate on animal power. So I was happy to see that somebody finally created just what nobody actually needed – a submarine that runs on hamster energy. 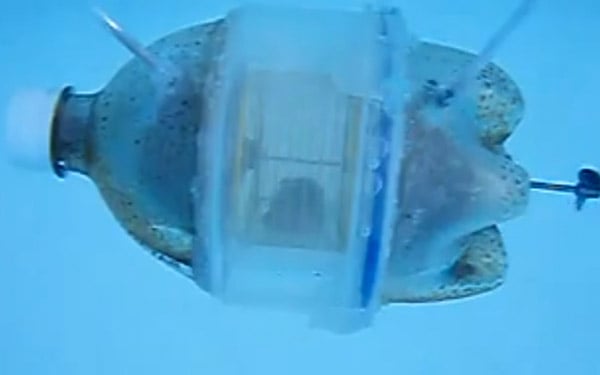 That’s right. No nuclear fuel rods here, just good old fashioned fast feet on a wheel. This odd looking contraption called the HPS Hamstar was actually created out of an 3-liter soda bottle, with a hamster cage grafted into the middle of it. The whole thing is air-tight, so it doesn’t leak. In case you’re worried about hammie expiring from lack of oxygen – don’t. The HPS Hamstar has air hoses running into it to keep him breathing and happy. As happy as an underwater hamster in a wheel can be, that is. Here’s a video of the Hamstar’s maiden voyage, in case you don’t believe this ridiculous story:

If you’re interested in seeing how the HPS Hamstar was built, you can check out the project website here.

[via Obvious Winner via Geekologie]