If you have built large creations with LEGO before, you know that keeping your bricks sorted is essential to keeping things in order. Otherwise it will drive you crazy looking for one specific part in a large bin. You need them sorted and ready to use. Brickit’s LEGO creation will automatically sort your bricks for you. 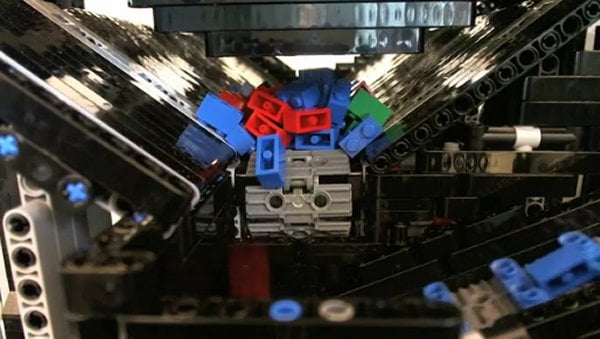 They built it as a demonstration of Dynaway’s real-world manufacturing systems. The miniature can organize bricks by size and color and works just like the ones used in factories that sort things of different shapes and sizes, except this one is powered by LEGO Mindstorms NXT.

The mini sorting plant boasts 7 NXT Intelligence Bricks, 28 motors and 22 sensors. It will sort any 2×4 or 1×2 block that it comes into contact with. After it sorts your bricks, a bot comes along to retrieve the full palette and move it, replacing it with an empty palette. It’s hypnotizing to watch this thing in action.

With the real LEGO factory featured on a recent episode of Ultimate Factories, it’s only appropriate that someone would build their own mini LEGO-powered factory.

[via Make: via Geek]