We talked about Innovega’s iOptik contact lenses in the past. The development of the lenses was funded in part by the United States Department of Defense. The company has announced that it has signed a contract this week with DARPA to deliver a fully functional pair of lenses to the research organization for testing. DARPA is going to investigate the ability of the lenses to be used by soldiers in the field. 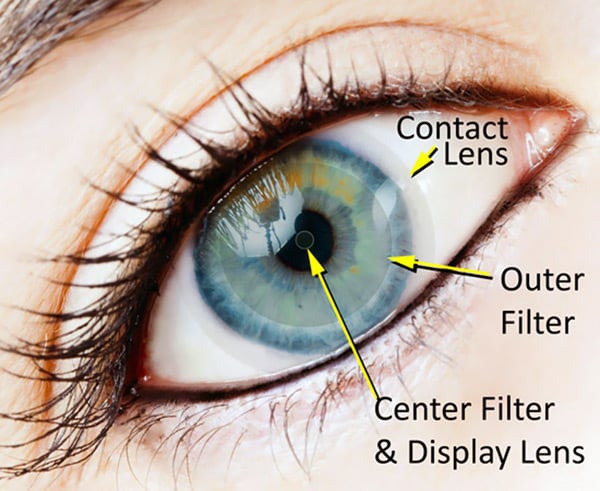 DARPA hopes the lenses will be able to superimpose data about targets and other points of interest over the soldier’s normal vision. As we mentioned before, the lenses have dual filters and are able to allow the eye to focus on things that are close and far away at the same time. The center filter directs light from the HUD to the center of the wearer’s pupil. At the same time, the outer filter directs light to the rim of the wearer’s pupil allowing both images to reach the eye at the same time, and the can focus on both.

The company developing the contact lenses says that they are also in testing at the FDA right now and are expected to be available for consumers by 2014. However, some eye care professionals are warning that depending on how fluid the images are, some people could get motion sickness while wearing them as they move around. The big thing will be augmented reality with these contacts. The company also thinks the contacts could useful for watching 3-D movies while wearing normal glasses by sending different images to each lens.