Mark Rober had a cool idea – he wanted to make a giant illuminated Mario and float him into the night sky. He achieved this using dozens of balloons loaded with LED illumination. 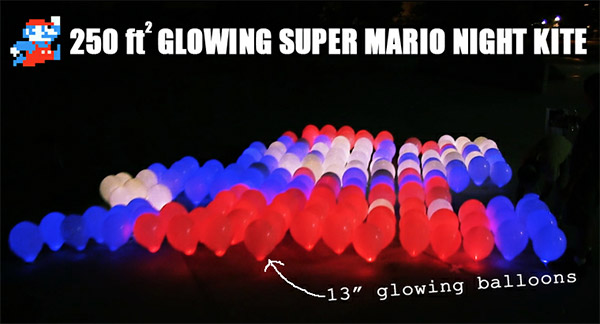 While the 250 square foot balloon grid looks most like Mario when lying flat on the ground, you can vaguely make out the floating pixel art in the video below:

I suppose if there were a way to better secure the balloon rig so it doesn’t move around so much, it’d be that much cooler. Still, it’s the first time I’ve seen illuminated balloons used to make pixel art, and that’s cool in my book.

As indicated in the video, you can use the same approach to make just about any floating pixel art you want – assuming you can make the grid light enough. In this case, they made the grid using carbon fiber rods and string, but you could also use bamboo. Check out this other video clip to see exactly how he pulled it off:

I’d love to see what the largest light-up balloon structure you guys can make, and then share the pics with us. Just don’t tell the cops or the FAA you did it.

[Thanks for the tip, Mark!]