The newest model of the Parrot AR.Drone can be controlled via the iPad. Fancy eh? Well, researchers at Zhejiang University have come up with a way to control the quadcopter using a person’s brain waves. That’s telekinesis, Kyle. 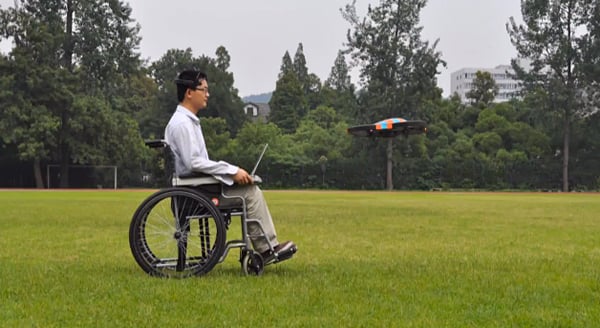 Or not. Even though the dude above looks like he’s got a Professor X thing going on, the real magic isn’t in his DNA but on a PC. An EEG wired to his head reads his signals, which is processed on his laptop, which in turn wirelessly sends the equivalent command to the drone. The goal is to help disabled people be more independent and to be able to explore their surroundings, but there’s no reason normal people can’t enjoy this technology as well.

Combine the FlyingBuddy 2 with the ShockDrone and you have one hell of a party game.