Well, here’s an odd little story that happened over in jolly old England recently. A woman living in Paignton, Devon started hearing strange clanking noises on the roof of her house, and decided to go outside and have a look. After investigating, she found a couple of orange practice golf balls sitting on her yard. She figured it was from some neighborhood kids playing around, and moved on with her life. But then the balls kept raining down. 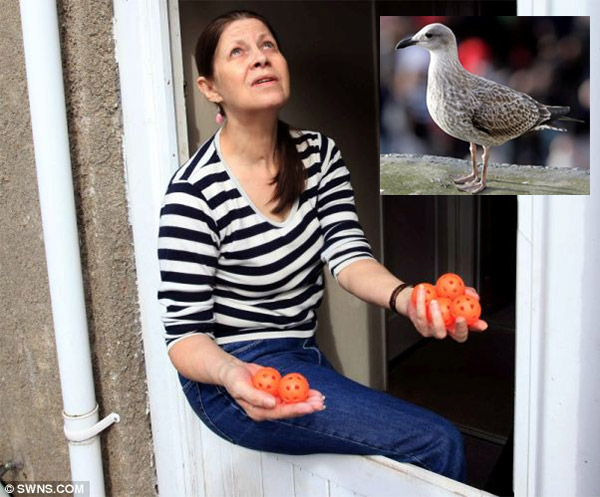 Turns out that after much puzzlement, the brightly-colored plastic golf balls were coming not from kids, but from gulls flying overhead and dropping them on her roof.  Apparently, the seagulls think that the balls are mussels, and that dropping them will crack them open so they can get at the tasty morsel inside. I’m sure the gulls are very disappointed when they find out there’s a whole lot of nothing inside of them. Now why they decided to repeatedly use this woman’s house for target practice is anyone’s guess – maybe she ran over a seagull in a past life. So far, more than fifty of the balls have found their way onto the woman’s home.

What’s even more confounding is that nobody seems to know where the balls are coming from – after checking with many local golf courses, none of them use such balls for practice. Perhaps she can start her own driving range now.