Peter Olt nearly got into an accident when a car suddenly cut into his lane, unable to hear – or perhaps ignoring – his honking and cussing. The incident prompted him to make some noise, so to speak. Olt invented a loud vehicle horn called the Screaming Banshee. Now he’s raising money to produce a smaller variant, the Plug & Play Screamer. 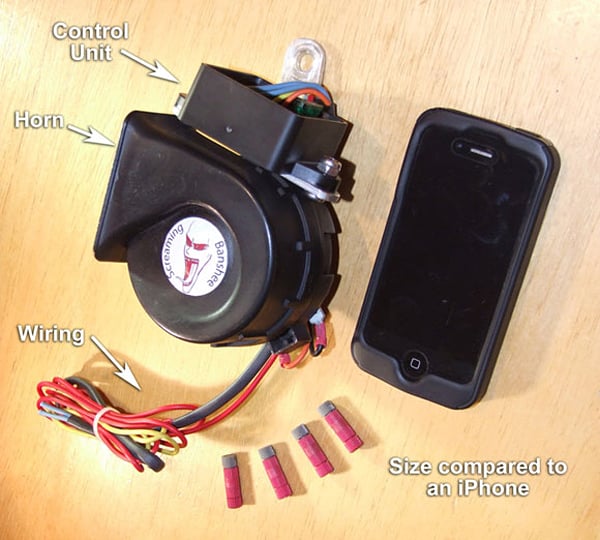 When installed, the Plug & Play Screamer gives you two horns. Tap your car or motorcycle’s horn button and you’ll get the standard sound. But if you hold it down you’ll get a 120dB sonic attack and your headlights flash for a split second.  The Screamer is quieter than the Screaming Banshee, which can go as loud as 139db, but it’s also easier to install. It has four wires – two connect to the stock horn, one to the battery and one to the high beam lights. Olt will also make easy to follow video instructions for newbies.

Pledge at least $79 (USD) on Olt’s Indiegogo fundraiser to reserve a Plug & Play Screamer. The only thing I don’t like about this invention is that it could be abused in the wrong hands. We have enough obnoxious drivers as it is.