Wil Wheaton has a gnarly sense of humor. Maybe that’s something you sort of develop if you play a character that creators loved but audiences loathed on Star Trek: The Next Generation. Yes, folks, Wil Wheaton is the guy who played Ensign Wesley Crusher. He’s also a superstar among geeks. 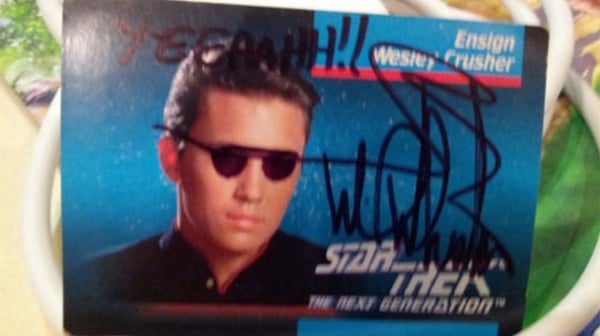 He also happens to have a big heart.

Wil was recently asked for an autograph by the friend of a friend who loved Star Trek. Wil happily obliged, but when he signed the card, he accidentally over-signed and left a huge black mark on his face. So he did what anyone would’ve done in the same situation: he doodled on a pair of sunglasses over his eyes.

Then to complete the whole thing, he added on a ‘Yeeaahh!’ on top to transform the sunglasses into the Sunglasses of Justice. Yeah, that’s all it takes.

Long story short, Wil’s friend forgot who the autograph was supposed to be for so he’s decided to put it up for auction instead – and all the proceeds go to charity. Bidding began at $1 but now it’s up over $1000, and the auction closes late tonight.