Before flat screen TVs became so affordable, I used to be a big front-screen projection user. While most of us are more than satisfied with our LCD and Plasma displays these days, you still can’t do any better than a front projector if you want a screen bigger than about 80 inches – unless you’re the ruler of a small nation. While I’m not sure if the picture quality of this inexpensive projector is anything spectacular  it differentiates itself by having a complete Android computer built into it. 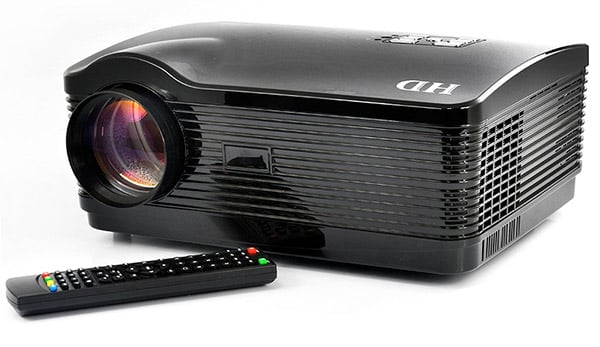 The DroidBeam Projector touts a long-life 120W LED projection source, claiming a bright 3000 lumen output level. It can project images from 25 to 250 inches, from a distance of 1 to 6 meters. Under the hood it’s got a 1.5GHz dual-core CPU, running Android 4.1 Jelly Bean and built-in 802.11 b/g/n Wi-Fi. This means you can not only watch content from traditional video sources, but play games and media from the Google Play store, watch YouTube videos, and surf the web without any additional hardware. Yes, you can theoretically play a 250-inch diagonal round of Angry Birds on this thing.

The projector has dual HDMI inputs, as well as composite, component, S-Video and VGA inputs. You can also play back media from an SD card. It’s also got a pair of speakers and a 2x2watt amp built in, so it’s truly self-contained. On-board storage is 4GB, and it’s got 1GB of system RAM. It’s unclear how you control the cursor, but it does come with an infrared wireless remote, so it’s possible that has some sort of motion control in it. It’s also got USB ports, so I imagine you can plug Android-compatible devices into those. 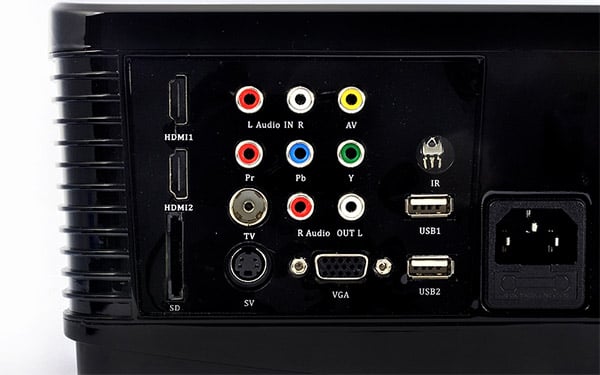 You can get your hands on the DroidBeam projector over at Chinavasion for about $450(USD). The product listing claims the projector offers “Full HD 1080p” resolution, but I’m suspicious that at this price, its native resolution might be lower. You’ll want to confirm with Chinavasion before plunking down your hard-earned cash on this one.