Is There Really a Market for $32,000 Mushroom Flash Drives?

I’ve seen my fair share of incredibly odd devices for computers over the years, but most of the really bizarre stuff is rather cheap. You have to figure that the stranger a device is, the less money it has to cost for people to be interested. That isn’t the case with a company called Shawish that has just unveiled some new USB flash drives that look like mushrooms. 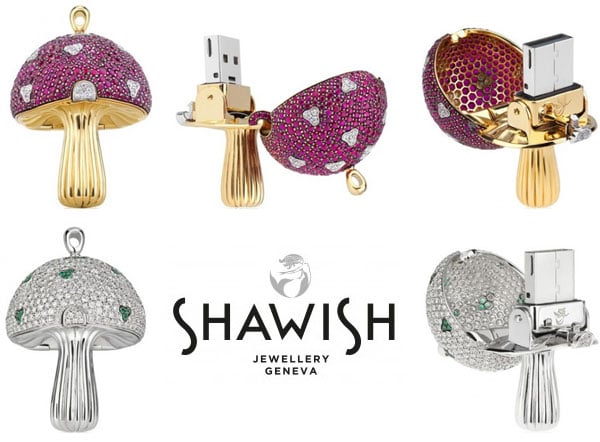 First off, I don’t think there are a lot of mushroom enthusiasts out there that have been sitting around counting the days till they could find a fungus-inspired storage device for their computer. Oh, did I mention that these drives cost up to $32,000 each? Yep, these aren’t any old mushroom-shaped storage devices, they’re made out of precious metal encrusted with real gemstones.

The mushroom flash drives are made from yellow, pink, or white 18 karat gold. They’re also bejeweled with rubies, sapphires, or diamonds. The flash drives themselves have just 32 GB of storage space. You’d think for this price, they’d splurge for a 1TB model at least.

I just don’t see anyone buying one of these for that kind of money. Who knows, maybe there really is someone out there with more money than sense. And who also loves mushrooms.