Switchboard Mixes Multiple Internet Connections: With Your Powers Combined, I Am Faster Bandwidth!

I’ve often wished that I could combine the speed of my cable Internet connection with my phone’s data connection to form one slightly above average connection. If you’ve been wishing for the same thing my wish buddy, take a look at Switchboard. It’s a subscription-based cloud service that will let you tap into multiple Internet connections at once. 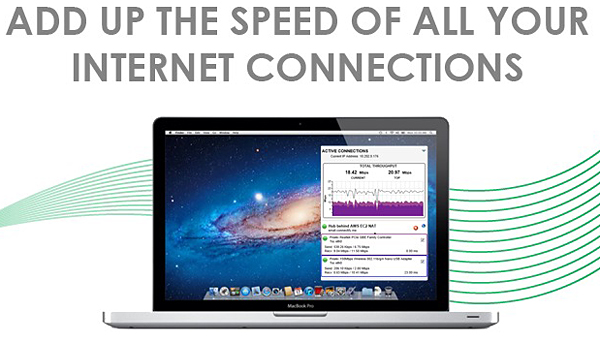 The Switchboard service is currently being developed by a company called Connectify. The company claims that its servers can spread the packets that you upload or download across multiple Internet connections. All you have to do is link your computer to these connections; the Switchboard software and Connectify’s servers will do the rest.

Switchboard is actually similar to one of Connectify’s other apps called Dispatch. Dispatch can also send data to and from your computer through multiple Internet connections. The upside to Dispatch is that it doesn’t need to pass through a server. That means you only pay once – just for the client software. But Connectify says that Dispatch is only good for applications or processes that use multiple sockets at once, such as web browsing or peer-to-peer connections. Programs that use single sockets like Netflix and Hulu will gain nothing from Dispatch. Also Dispatch doesn’t have a Mac client, whereas Switchboard will have one.

Pledge at least $60 (USD) on Kickstarter to be one of the first to try out Switchboard. But with great speed comes great expense. Not only is Switchboard a subscription service, its plans also have data caps. The limits range from 10GB to 2TB per month depending on your plan. I’m not saying that’s unreasonable, but now I have another wish: I wish that future computers had this functionality baked in.