I’m a fan of crowdfunding and crowdsourcing of products. However, sites like Kickstarter and Indiegogo don’t really let the community decide what sort of projects make the cut for a funding opportunity, so alot of similar – and sometimes downright crummy ideas make it to the stage where they can be funded.

JumpStartCity is new arrival on the crowdfunding scene, which wants visitors to help pick which projects are even eligible to ask for funding. 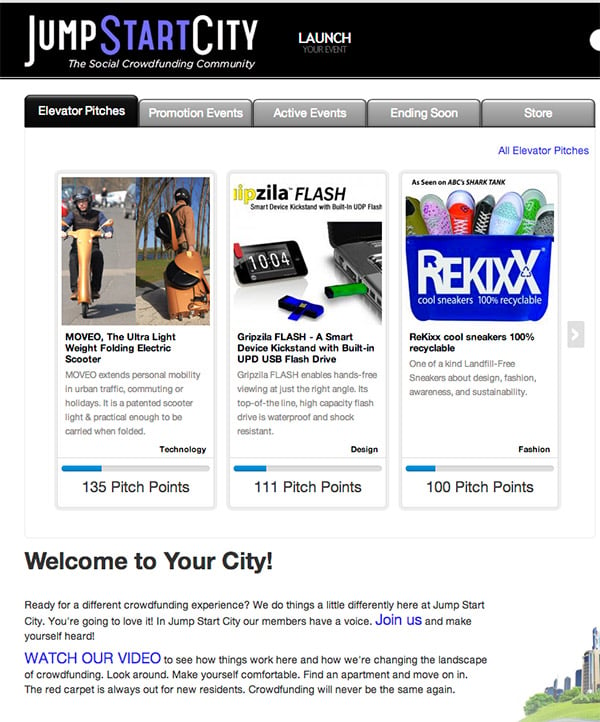 The biggest thing makes JumpStartCity unique is the addition of its “Elevator Pitch” stage – which allows those with products and services to convince readers that their projects are worthy of funding. Personally, I love this idea to help weed out the riff-raff before any money changes hands, and should help keep the number of projects which make it to the funding phase down to the cream of the crop. Members of the community can be notified whenever new ideas are submitted, providing greater visibility to each and every project than competitors.

Another step along the way is the Promotion Stage. This is a phase which occurs prior to funding to allow creators to promote their products and services and build buzz before fundraising begins. After they’ve built up some momentum during this stage, only then do they move on to the “Active” or funding stage. Unlike other crowdfunding sites, the funding stage is short – only 20 days – focused on producing the biggest impact in the shortest period of time. Creators can extend this by another 20 days after successful funding if they so choose. One other nifty feature of the platform is called “Cash at Goal” – which allows creators to immediately receive their funding as soon as the goal is reached, with any overages coming at the end of the fundraising period. This gives creators the ability to start their projects earlier if their goal is met early.

There are also benefits to community members for being active, including greater influence, extra points you can “spend” for your favorite elevator pitches, and potentially cash for receiving and watching elevator pitches. Early project backers also get a 10% discount during the first 24 hours of funding. Community members also get 1% of their purchase price back in the form of credits which can be used on future projects.

Since the site is in its infancy, JumpStartCity does face an uphill battle convincing consumers to participate in their site instead of the already-established players in the crowdfunding market. However, they do offer a unique approach with benefits to both creators and buyers which could set them apart.

You can sign up for JumpStartCity here, and then check out the current projects in the funnel here. It’s definitely worth checking out.