The Oculus Rift will most likely lead to a new genre of first-person games, but it could also make drones a lot more fun to use. For his master’s thesis, Jonathan of Intuitive Aerial is working on Oculus FPV, a drone camera system that streams 3D video that can be viewed with the Rift. 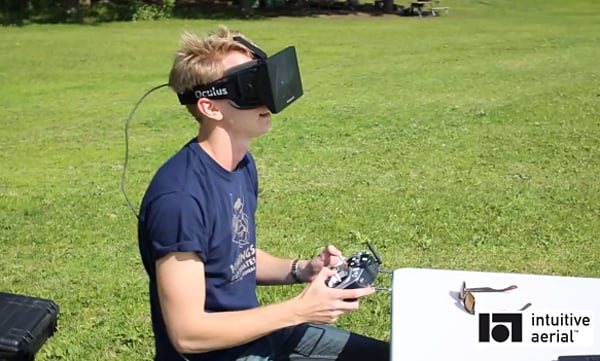 The system uses a Black Armored Drone carrying a laptop and two cameras. The laptop compresses the feed from the two cameras and sends them to a second computer on the ground via Wi-Fi. It’s a crude setup, but it works. According to Intuitive Aerial the current rig has a range of about 160′ to 320′ when using Wi-Fi cards. The video latency is 120ms, good enough for the viewer to pilot the drone at the same time.

That shot of the pilot wearing the Rift reminds me of Ghost in the Shell. Intuitive Aerial said it will improve Oculus FPV if it receives enough interest from potential clients. They should incorporate the MYO armband to Oculus FPV make it more fun to use.

[via Intuitive Aerial via Walyou]