Man who catch fly with chopstick, accomplish anything. Man who catch most sushi with chopstick, become ChopsticKing. That idea behind – I mean that’s the idea behind Chopsticking, an Arduino-based board game made by NYU ITP students Christina Carter and Jess Jiyoung Jung. It’s a two-player game where you compete to grab the greatest number of sushi. 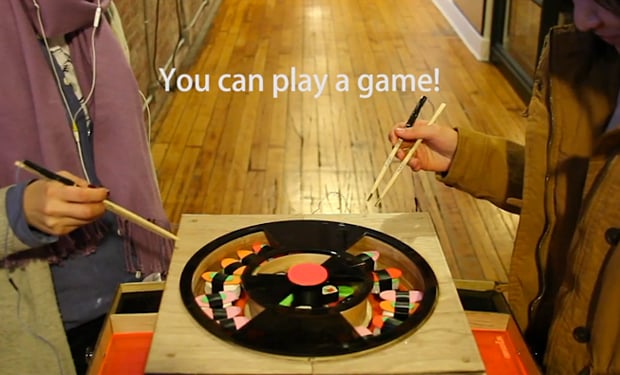 Chopsticking consists of two pairs of chopsticks, a board with a circular receptacle and tokens that look like sushi. There’s a metal plate that obscures part of the bin as it rotates, making it harder to fish out the tokens. Before you play the game, you first have to hold the chopsticks in the proper manner – your index finger and thumb must be resting on the upper stick while the lower half of your thumb anchors the lower stick in place. The Chopsticking sticks have sensors that detect if your fingers are in the right areas, so no cheating by using a fork or your fingers. 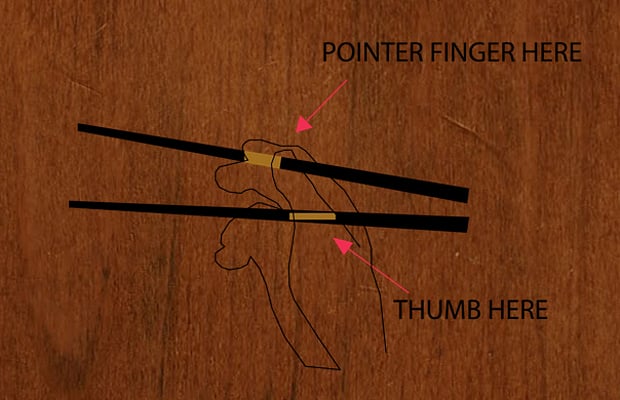 When the game begins, you pick up sushi tokens as fast as you can, but you also have to dip them in “soy sauce”, which is actually an RFID reader that detects the tags on the sushi. The player is awarded two scores at the end of the time limit. One is for the number of sushi you were able to dip in the sauce while the other is for how well you held the chopsticks.

Christina and Jess showed off Chopsticking at the World Maker Faire in New York City. It must have been a hit-and-miss affair.