The DARPA Robotics Challenge is all about encouraging the development of humanoid robots that can complete the same tasks we humans do, but in more dangerous conditions – a robot that can get the job done when we don’t want to. When those participating in the challenge were announced last year, one entry really stood out. And today, NASA’s DRC robot actually exists. It’s called Valkyrie 1. 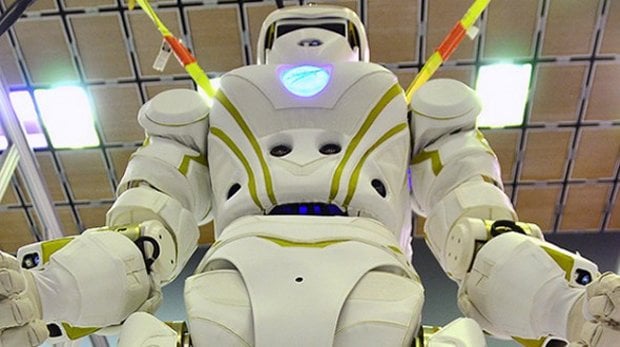 This robot looks a bit like Iron Man, but in white. It has a 1.9-meter-tall frame that weighs in at 125kg. That’s almost 6-feet-tall. Valkyrie 1 has 44 degrees of freedom, so it is very flexible. The arms alone have seven degrees of freedom and the legs six. Valkyrie 1 and the other entrants will have to perform tasks like climbing a ladder, driving a utility vehicle, and using tools. Therefore the design must be up to par.

Valkyrie 1 has cameras in its head, wrists, torso, and legs. This way the operator can get a view from almost any angle when controlling the robot. Its limbs are interchangeable, and most of the components can be removed in minutes, so this robot is easy to repair as well. You can see Valkyrie 1 in action in the clip below: