King’s Assembly Keyboard & Mouse Hybrid Will Have you T-rexin’

We’ve featured a couple of unusual keyboard and mouse hybrid devices, but so far it looks like people like their devices just as they are – separate and not looking like devices you’d use to pilot an alien spaceship. I wonder if Solid Art Labs’ King’s Assembly will fare any better. At the very least it’s the least weird-looking of the bunch. 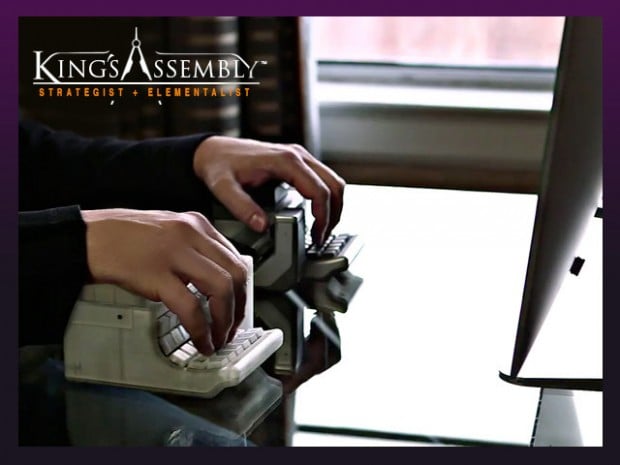 The King’s Assembly is a pair of devices (a left and a right “hand”) that each have an optical laser sensor, 35 keys with Cherry mechanical keyboard switches (30 in front and 5 near the thumb rest) and an analog joystick. Because you only get 70 keys at most, one of the keys can be set to serve as a modifier. Hold that down and you can access the secondary function of the other keys, giving you a total of 139 key mappings. Speaking of which, each device will have a preset key mapping, but you’ll be able to create new mapping profiles as well.

Each hand can serve as a mouse and keyboard on its own. But if you have both hands you’ll need to link them using the included interconnect cable if you want to use them in tandem. Once they’re linked, your computer will only see one mouse and one keyboard instead of two of each peripheral. Also, each hand has its own USB cable, but when they’re linked you only need to connect one of their USB cables to your computer. This means you can connect a pair of hands to two computers at once. 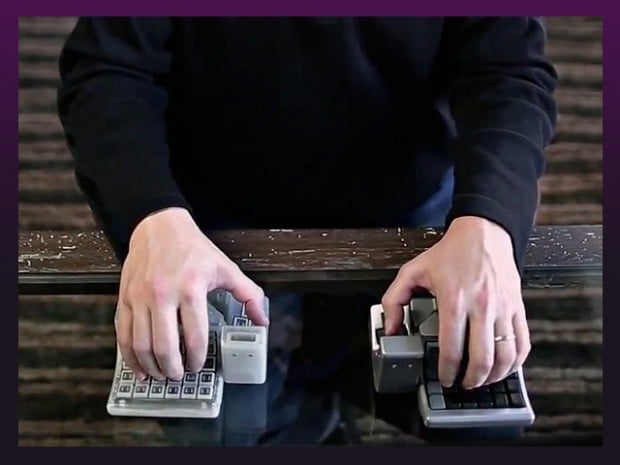 How will the two mice act as one? The King’s Assembly’s built-in Atmel microcontroller will average the input from the hands’ optical sensors and send that as one signal to your computer. That may sound weird, but we’re used to using just one of our hands to move our mice anyway, so that shouldn’t be a big problem. You’ll also be able to tweak the sensitivity of each hand’s sensor separately or even disable a hand’s mouse input altogether.

Finally, the joysticks will be useful in playing video games, but you can also use them as scroll wheels.

Pledge at least $110 (USD) on Kickstarter to get one King’s Assembly hand as a reward; pledge at least $200 and you get a pair. I think I’m good with my low-tech keyboard and mouse for work and daily use, but I can see myself using these for gaming.