George Zisiadis – one of the designers behind the sweet mistletoe drone – shares with us one of his latest concepts: a public art installation on the facade of the Santa Cruz Museum of Art & History filled with large pinwheels. Visitors will be able to make the pinwheels move by blowing into horns located around the installation. 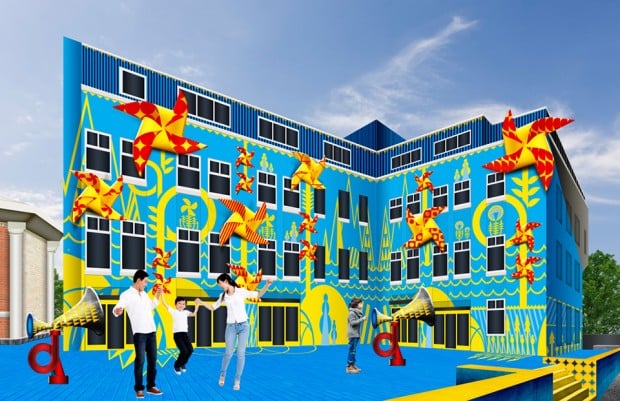 George said that there will be about a dozen oversize pinwheels in total, with the largest one about 10ft. in diameter. But visitors won’t need to blow as hard as they can into the horns, because the pinwheels are actually powered by electric motors. Microphones will be hidden in the horns to detect when someone is blowing into them.

To encourage interaction, George will make it so that blowing into one horn triggers only some of the pinwheels. Therefore visitors will have to man all the horns at once to make all the pinwheels move simultaneously. Here’s George testing his prototype:

If the museum picks George’s concept, visitors may be able to play with the pinwheels this summer. Good luck, George!