Ever since trying out professional quality headphones with a digital audio converter (DAC) and headphone amp, it’s hard for me to listen to music without them. Unfortunately, the amplifiers in most computers are woefully underpowered – and most headphones are designed to operate at a low impedance to make up for this shortfall. But most headphones prefer to be driven with more power than most consumer electronics can muster. Additionally, the DACs built into most computers are sub-par in my experience.

I recently had the opportunity to test out a combination DAC/headphone amp from Cambridge Audio called the DacMagic XS. 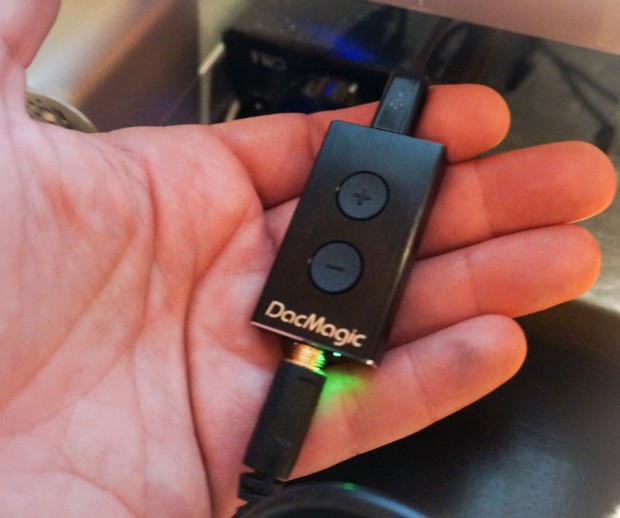 This pocket-sized device is easy to tote around wherever you go, and provides a significant boost to headphone sound quality on your PC or Mac. Measuring just 2.1″(h) x 1.2″ (w) x 0.4″(d), and weighing only 3.5 oz., it’s definitely teensier than I expected it to be. 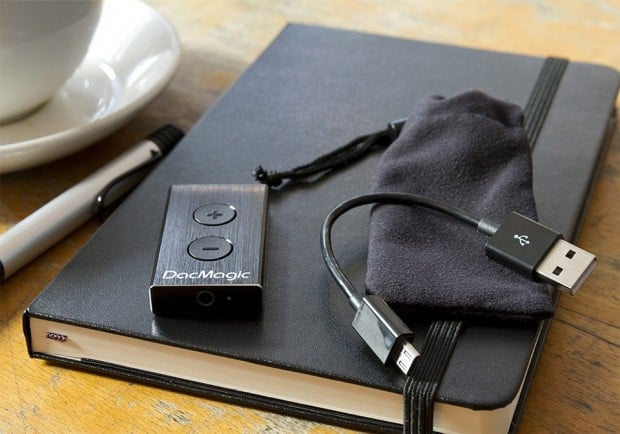 The DacMagic XS plugs into your computer’s USB port, and bypasses its internal audio output. Its 24-bit ESS9023 DAC is capable of handling audio bit rates from 44.1 to 192kHz, and its amp puts out up to 150mW of power. It’ll work with headphones with impedances as low as 12 Ohms, but will also work with higher impedance studio quality ‘phones. In my case, I tested the unit primarily with my current favorite cans, Beyer Dynamic’s DT990 Pro 250Ohm headphones.

To test the DacMagic XS, I first connected my headphones to the headphone jack on my 2011 iMac, and cranked up some high-quality digital tracks from iTunes and some medium quality tracks from Pandora. I was pleasantly surprised to find that the miniscule box pushed out nearly as much volume as my much larger and less portable FiiO system.

Thanks to it’s almost non-existent 0.004% total harmonic distortion, sounds are clean and crisp at any volume level. I definitely found sound to have crisper highs and much clearer lows when listening via the DacMagic than via the iMac’s built-in headphone jack.  One of my favorite audio test tracks is Donald Fagen’s 1980s jazz fusion classic New Frontier, because it’s got huge dynamic range both in instrumentation and vocals, and most cheaper sound systems fail to extract the brilliance of the track. On this track, I found audio from the DacMagic XS to be significantly cleaner than the computer’s built-in DAC and amp. It’s especially deft at producing clean sound at lower volumes which cheap amps don’t do well.

To mix things up, I also tried out my trusty old iPhone earbuds with and without the DacMagic XS. Connected directly to my computer, sound was harsh – almost unlistenable at higher volumes. With the XS in place, sound is more evenly rounded and not as harsh – though it can’t do much to aid the lack of low end in earbuds. Still, sound was decidedly better with the XS connected.

For my final test, I tried tracks on my Marshall Monitor headphones, which offer very even and natural sound but at a low impedance. Sound has a tendency to be a bit muddy and lacking in definition plugged right into the iMac, but with the DacMagic connected, sound is wonderfully rich and well balanced. Again, a clear win for the little guy.

There’s really not much to dislike about the DacMagic XS. Certainly it’s a winner in terms of sound quality, size and portability. You can really take it anywhere. I have a couple of gripes, but they’re fairly minor. First, when connected to my iMac, I could no longer use the keyboard volume controls, and could only use the face buttons on the DacMagic. For comparison, this isn’t a problem with my FiiO DAC/amp. And while the tiny MicroUSB/USB cable is good for many situations, I think they should have included either a longer cable or a coiled version, in the event you don’t want the DacMagic dangling from the back of your computer and want it to sit flat on your desktop. Plus, a longer cable would be good if you’re using a workstation and not a laptop or all-in-one. Still these issues are very small, and the DacMagic XS does exactly what it promises – dramatically improve sound quality in a tiny package.

The DacMagic XS is available from Amazon for $189(USD).