Gene Bransfield will make you think about securing your wireless networks the next time you see a cat with a collar. The security engineer has become famous for his goofy invention, the WarKitteh. Hidden in a cat collar, WarKitteh records Wi-Fi access points along with GPS data. Put it on a cat and it could survey your neighborhood for you. Or it could just stay at home and lick its junk all day. 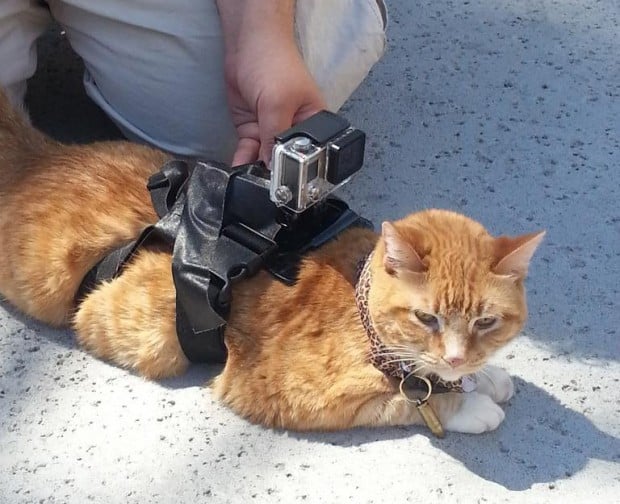 WarKitteh – again it’s all in the cat collar; the GoPro in the image above was placed by CNN – is powered by a Spark Core microcomputer running Gene’s custom firmware. It also has a Wi-Fi card, a GPS module and a battery. Earlier this year, Gene shared his WarKitteh prototype at Shmoocon. It was an Android phone running a Wi-Fi sniffing app. 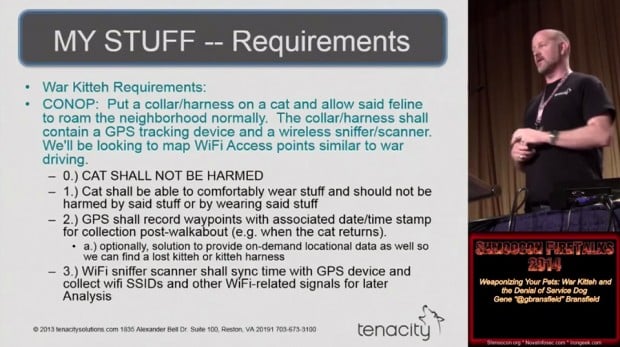 He placed the phone on his cat using a dog coat, but the coat proved to be too bulky; the cat was able to wriggle its way out of the coat and left it behind twice. Hence the need for a smaller version. YouTuber Adrian Crenshaw posted Gene’s Shmoocon presentation. You can skip to around 5:33 for the meat of his talk, but really the whole thing is just fun and filled with images of “weaponized animals.”

Speaking with Wired, Gene said that he made the device only for fun, “[b]ut the result of this cat research was that there were a lot more open and WEP-encrypted hot spots out there than there should be in 2014.” The video below shows the data gathered by one of Gene’s cats with the help of WarKitteh.

Read Wired’s article on WarKitteh if you want to learn more about the device. Gene also presented his project at this year’s DefCon, so there could be even more news about it this week.

[via Gene Bransfield & Wired via The Verge]