Don’t have the money, skills or father for a functional flight simulator? Dogfight Boss can help you feel the need for speed with its cardboard jet fighter cockpit. Dogfight Boss founder Lukas Homola based the cockpit’s structure on the F-22. He and his friend went to a museum to take photos of the cockpits of vintage planes, and then used the images to create high resolution textures. 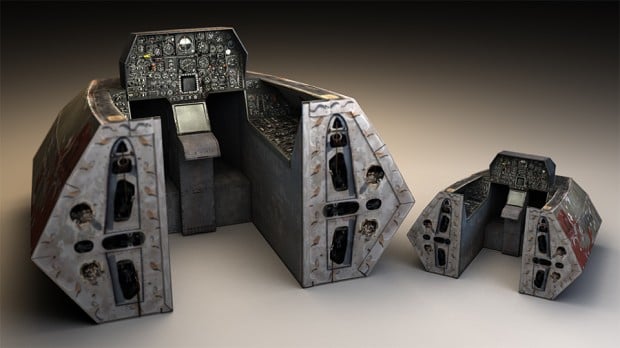 The full-sized cockpit can accommodate standard office chairs. It comes in two joystick configurations: one with the joystick stand in the middle and one with the stand on the right side. The cockpit has a ribbed frame for durability and can easily be assembled or disassembled. Because it’s made of cardboard, you can easily cut out some of the parts if you want to make room for a monitor or some other peripheral.

Here’s more on the cockpit from Lukas:

Dogfight Boss plans on releasing different cockpit styles in the future – e.g. airliner, spaceship, train, F1 – but they need to get this model off the ground first. So do some of that pilot stuff and pledge at least £299 (~$500 USD) on Kickstarter to get the full-sized cockpit as a reward. Some of the lower pledge tiers offer a PDF template of the cockpit or its kid-sized version, while the higher pledges offer customization.