Out there, right now, there are people with a dire need for your blood, and 99.98% of them aren’t vampires. Instead, they’re in need of medical attention. Donating blood is a good thing to do because it can save lives and preserve the vampire race. If they die out now, the last major vampire pop culture moment will be Twilight and the final season of True Blood and that’s just unacceptable. The problem with blood donation is that it’s not much fun, and while there are many, many more pressing problems in the world, a small group of people decided to fix that one. 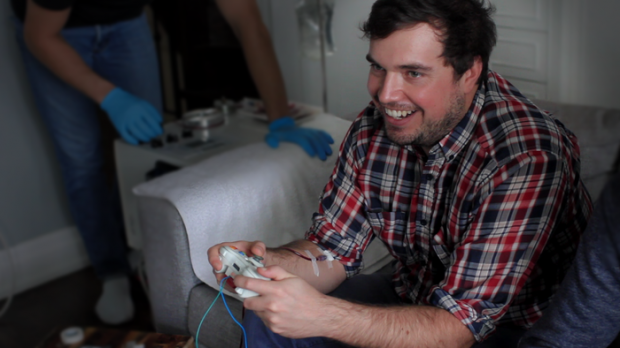 Blood Sport uses modified rumble packs to make you bleed when your character bleeds in a video game. That’s right, when you get shot in Battlefield, this device will automatically remove some of your blood. Of course, a medical professional will be standing by to make sure the game doesn’t take too much, because the whole point of simulating combat is that nobody actually dies. It just doesn’t seem entirely fair to me though, as it doesn’t appear that any of your blood gets put back when you grab a health pack. It’s much better for the wounded and the vampires that way.

Blood Sport is looking to raise $250,000 on Kickstarter to create mobile gaming blood drive trucks in coordination with charities and gaming groups.