On July 1, a ridiculous law in Spain will take effect. Insultingly called the Citizen Safety Law, the legislation forbids public demonstrations outside government buildings and other structures that “provide basic services” unless permitted by the goverment, among other things. This is clearly a violation of human rights, which is why a group of activists called We Are Not Crime staged a virtual protest. 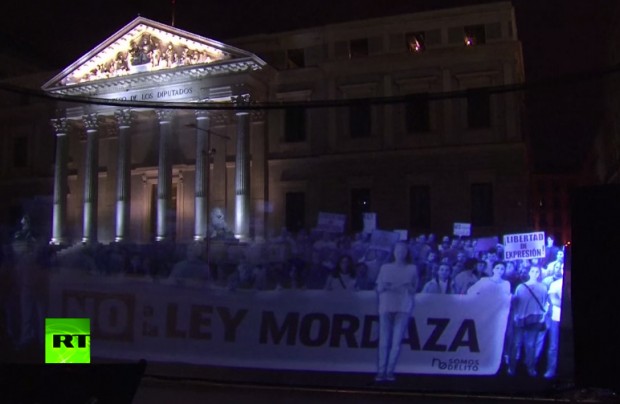 I’m not sure if We Are Not Crime’s setup officially counts as a hologram, but as you can see in RT’s report below the protesters’ video appears to float inside a transparent enclosure and seems to provide the illusion of depth.

Regardless of its technical aspects, the protest is a great metaphor that cuts both ways. It shows the citizens’ refusal to be silenced, but it’s also a peek into a dystopia where free speech has been reduced to a mockery of itself.

[via Holograms for Freedom via NOTCOT & RT]