One of the latest amazing robots to come out of the Swiss Federal Institute of Technology in Lausanne (EPFL) is based on a Salamander. It can mimic the way a salamander moves, on land or in the water. It goes by the name of Pleurobot (named after the species Pleurodeles waltl). It was designed by studying x-ray videos showing real salamanders walking and swimming. 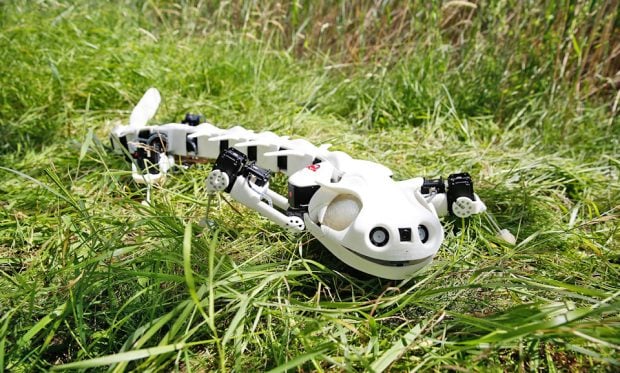 He’s pretty cute for a robot, and has the most realistic movements of any amphibian bot so far. They have built others. This is also the first one that’s “accurately based on the 3D motion of the animal’s skeleton.” Pleurobot has 3D-printed bones, motorized joints and an electronic circuitry that is basically a synthetic central nervous system.

One difference is that it has fewer vertebrae than a real salamander. This was intentional, in order to get the machine’s movements to look as authentic and natural as possible. If you wonder why researchers would spend time building a robot salamander, there’s a good underlying cause. This robot will help the team better understand vertebrate locomotion, which could in turn lead to better neuroprosthetic devices for amputees and paraplegic patients.