Retro-Bit revealed some exciting news at CES this past week in the form of a handheld game system loaded with old-school classics. The company calls it the Go Retro! It has a Game Boy style look, but in a black and red color scheme, with 4 buttons. The portable includes an LCD color screen with scratch-resistant coating and a 3.5mm headphone jack. It looks sweet. The best part is that it will come with a bunch of classic, licensed games built in. There are 300 titles that will be included on the system. 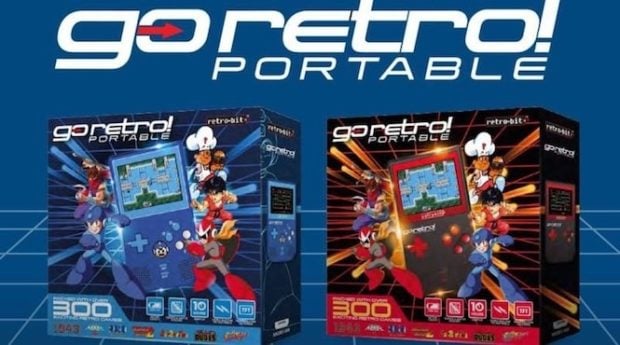 The titles are from names like Capcom, Jaleco, Data East, Irem and more. While we don’t have a specific list yet, we have the box art which shows games like Burgertime, Mega Man, Strider and Mighty Final Fight, among others. The handheld also has a rechargeable battery that can run between seven to ten hours, giving you a lot of gaming hours in one charge.

Side Note: This is the #GoRetroPortable!

We don’t have a specific release date yet, but the system will arrive sometime in December, in time for Christmas for the price of just $34.99. That price is not bad at all considering you get 300 games. Old school video game fans are going to love this portable. If nothing else, it will be a Christmas present for themselves.